Blazers and Rockets end in draw

Blair's varsity field hockey tied the Richard Montgomery Rockets 1-1 today, bringing their overall record to 1-2-1. The Blazers' lack of cohesion and failure to capitalize on scoring opportunities stopped them short of victory, ending the game in a frustrating, scoreless double-overtime. 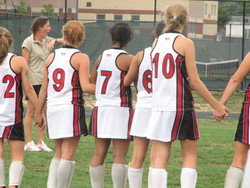 Photo: Blazers wait in anticipation as the game moves into strokes after an unsuccessful double overtime.

Photo: Blazers wait in anticipation as the game moves into strokes after an unsuccessful double overtime. Photo courtesy of Alex Lutz.

Early in the first half, Richard Montgomery penetrated Blazer territory, but precise interceptions from co-captain Helen Anderson stopped the Rockets' drive short. The teams continually struggled for possession as solid defense from both sides kept the offenses quiet. An opportunity finally arose for the Rockets when a player dribbled the ball along the right side of the field, weaving through Blair defenders. Richard Montgomery got on the board with a quick pass inside the goalie's circle that was chipped in for the goal.

After several more minutes of back and forth possession, Blair began an offensive attack that would end the first half. With seven minutes left, the Blazers put pressure on the Rockets with a combination of clean passes, multiple shot attempts and continuous corners. But, Blair was unable to convert and the whistle ended the first half while Blair was receiving yet another penalty corner.

The second half began with a similar battle for ball control. Both teams had many scoring opportunities, all of which were stopped by impenetrable defense. Two minutes into the half, Blair had a close call, missing the goal by a foot. Three minutes later, the Rockets were back on attack but also missed a goal, this one falling just inches short. 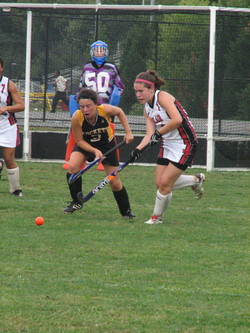 Photo: Junior Julia Stratton leads the ball down the field during the Sept. 20 match against Richard Montgomery.

Photo: Junior Julia Stratton leads the ball down the field during the Sept. 20 match against Richard Montgomery. Photo courtesy of Alex Lutz.

As time ran down, both teams continued the pressure on defense, but neither team could muster an offensive rhythm. Down 1-0 the Blazers needed a goal to stay in the game, and were able to send the match into overtime with a goal by junior Elsa Haag with just seconds left on the clock.

In the first overtime, co-captain Claire Onley tried to step up the Blazers' pressure on the Rocket defense with long passes downfield. The Blazers took advantage of the open field and passed the ball to the center of the Rocket circle, but no one was there to score. A series of fouls and blocked offensives from both teams ate up time, forcing the game into a second overtime.

The Blazers had possession for most of the second overtime, but again were unable to convert. Goalies from both teams made great saves and Richard Montgomery was able to fend off two Blair penalty corners which ended the final overtime.

In the event of a tied game after two overtimes, a strokes match determines the winner. The game ended in a tie after five players from each side were unable to score.

Head coach Brook Franceschini believed that the Blazers could have won the game. "We had a lot of scoring opportunities that we couldn't fulfill, we waited a little too long" she said.

Co-captain Sumih Chi agreed and noted several changes the team plans to make for future games. "Next time we're going to capitalize on our flats and throughs, and work together," she said.

The varsity field hockey team plays its next home game on Monday, Sept. 24 against Rockville at 3:30 p.m.