Blazers and Wildcats get all tied up

Blair's JV field hockey team tied the Walter Johnson Wildcats Wednesday in a frustrating scoreless home opener that continued into double overtime. Knotted in an even match, the Blazers' failure to capitalize on scoring opportunities cost them the victory.

Blair dominated the beginning of the first half, putting together strong passes and aggressive attacks. Freshman Blake Morgan-Gamber took charge of the midfield and provided a number of strong drives and potential fast-break passes to the forwards. However, the Blazers stumbled under the Wildcat's defense and failed to convert their efforts into goals. 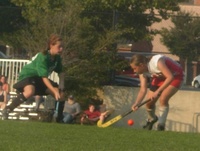 Photo: Sophomore Lily Alexander snatches the ball away from Walter Johnson during the first game of the season.

Photo: Sophomore Lily Alexander snatches the ball away from Walter Johnson during the first game of the season.

Despite the team's faltering energy as the half continued, sophomore Lily Alexander maintained powerful momentum and constantly attacked the ball. Although goal-hungry, Alexander's efforts went unrecorded due to the recoveries and saves made by Walter Johnson's defense.

The Blazers returned to the field in the second half determined to score and wasted no time in driving the ball to the offensive end. However, Blair's high energy and goal-frenzy proved volatile, producing sloppy stick obstruction fouls and reversing any progress the Blazers made. While both offenses both got a clear shot at the goal, neither team scored, each shot instead ricocheted off another player or veered away from the goal posts.

Going into the first overtime period, Blair attacked the Wildcat's defense, but again, a series of fouls and failed corner kicks from both teams quickly ate up the time without a goal.

The Wildcats opened the second overtime with a strong possession, but were staved off by sophomore goalie Annie Buckley who saved all three shots. Despite a few scoring opportunities later in the period, the Blazers had trouble with ball control all the way up to the final whistle.

The team's new coach, Nina Hagan, felt satisfied with the outcome of the first game. "The game was a good, even, and tough match. Going into overtime was a good experience for the team that will benefit us in the future."

Junior Captains Adelaide Waldrop, Neva Bowers and Jenna Craver were also pleased with the result of the game. According to Bowers, "both teams were relatively equal, and the score reflects that. I'm more proud of the fact that everyone worked hard and played well."

Waldrop is excited about the upcoming season admitting that it has been hard for the
team to adjust with so many new players and a new coach, but is confident that "the team can only get better!"

The Blazers' next home game is Thursday, Sept. 20 against Richard Montgomery at 5 p.m.