Blair students are looking ahead to the 2020 presidential election

March for Our Lives shirts, "Beto 2020" pins, stickers with the words "I stand with Planned Parenthood" — these are just some of the political symbols that Blair students have been displaying in recent months. Political conversations in the school community are constant on Instagram stories and at lunch tables alike. As the country enters an election season in the midst of a tense political climate, Blazers are very much active in the political scene. While only some Blair students are eligible to vote, most have strong opinions on who they would like to see in office and which policy issues they consider most important. 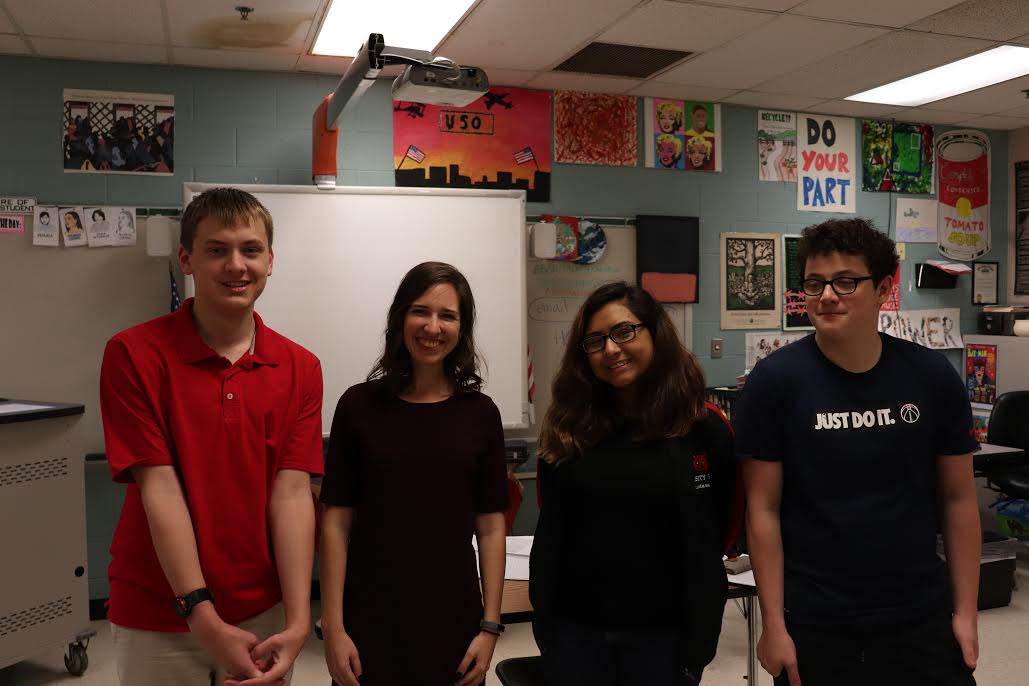 Photo: Students in Young Republicans are some of the Blazers who have been speaking out about the 2020 election

Photo: Students in Young Republicans are some of the Blazers who have been speaking out about the 2020 election Photo courtesy of Catherine Lo.

With over 20 Democrats and multiple Republicans running, the ballot for 2020 already looks diverse. Some Blazers aren't sure which candidate they will be supporting yet, but many have begun to narrow down their selection.

Senior Htoo Eh Redford-Maung Maung is scrutinizing candidates and looking at their funding histories to help him decide who he will be supporting. "Concerning Beto O'Rourke — a lot of people think he's a cool guy, he gains the second most money from [oil and gas] industries," he says. "We have to have people in office who actually care about our earth... so I feel like we have to be aware of who gets what from different lobbyists, corporations and companies."

Senior Ezra Schwartz is also invested in making his decisions based on candidates' pasts, citing corporate money and previous legislation as a deciding factor. "If you look at any of their records, Joe Biden was the author of the crime bill, Kamala Harris as a prosecutor jailed parents of truant kids and Cory Booker has been very close with Wall Street and Big Pharma," Schwartz explains.

Schwartz's friend Noah Gleason, also a senior, echoes the same sentiment. "Most of the candidates are way too centrist and corporate and taking large amounts of Wall Street money, so I don't really trust them," he says. Gleason isn't alone in shying away from centrist candidates — the past months have brought a slew of opposition to centrist Democrats. Celebrities and politicians alike have issued calls across social media for voters to oppose centrism in the 2020 primaries.

Because of their preference for more progressive candidates, Schwartz and Gleason have both decided to support Sen. Bernie Sanders, who ran as an independent in the general election. Sanders is the "furthest left viable candidate," according to Gleason. Both students made their choice partly because they appreciate his consistent voting record. "Since he was in his 20s he was getting arrested in civil rights protests. Bernie's the only one with a real record of consistently pushing for progressive policies and not just going on with trends," Schwartz says.

Non-career-politicians are included in Blazers' preferences too. Junior Aaron Shoham, who will be voting for the first time in 2020, is thinking about supporting Andrew Yang. Yang, an entrepreneur who announced his candidacy quite early, has gained popularity because of his support of universal basic income and his policies to prevent technology from taking over jobs. "I don't know exactly whether [Yang] has a chance of winning, but I think his ideas are really interesting… I think he's going to bring those issues into the public consciousness, which I think is important," Shoham explains.

Even Blazers who haven't picked a specific candidate yet are fixated on certain policy issues they hope will be at the forefront of the conversation leading into 2020. Climate change is a top contender. "I feel like my personal priority is what candidates' global warming policies are. Climate change is an issue that, in order for human beings and nature to thrive, has to [be addressed]," Redford-Maung Maung says. Gleason, citing the 100 companies responsible for 70% of carbon emissions, shares similar concerns.

Other Blair students, continuing their involvement in ongoing movements, hope to see gun control, immigration policy and reproductive rights discussed in this election cycle. "I care the most about gun control and immigration policy," junior Auzinea Bacon says. "I do have family members that are immigrants so I think that puts me closer to the issue personally… but it's important for everyone."

There will undoubtedly be an even larger politically-minded population at Blair as 2020 draws closer, especially within student activism organizations like Young Republicans and Young Democrats. Even those who aren't politically involved are being encouraged to participate by their peers. "Google candidates and their pasts, don't just read headlines," Schwartz laughs, advising those who are getting involved. With many controversial issues and candidates on the table, it is sure to be an interesting election season at Blair.