On Sept. 17 and 18, a team of four Magnet students, accompanied by Magnet Robotics teacher John Kaluta, participated in the World Maker Faire New York. Though this was Blair's first trip to the convention, the team, which included seniors David Kaufman and Jerome Glick and juniors Charlie Pasternak and Devin Luce, received MAKE Magazine's Editor's Choice Award for its student-produced Segway clone. 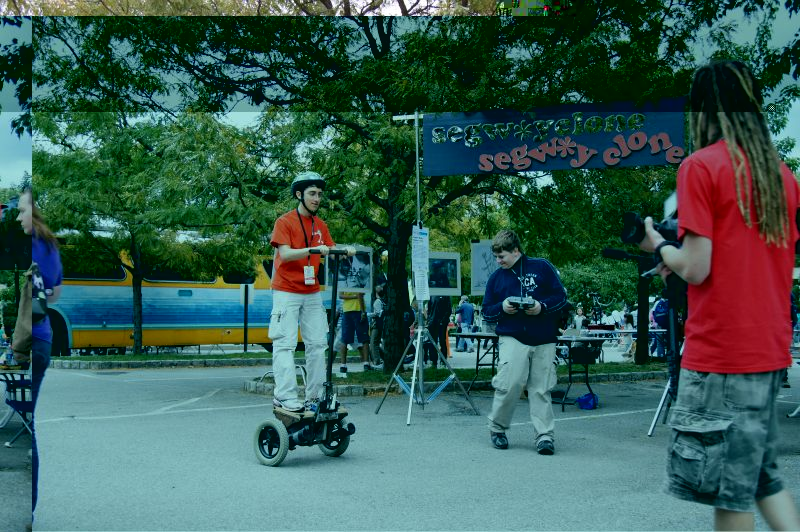 Photo: Senior David Kaufman and junior Charlie Pasternak give a demonstration of the student-produced Segway clone at the World Maker Faire in New York.

Photo: Senior David Kaufman and junior Charlie Pasternak give a demonstration of the student-produced Segway clone at the World Maker Faire in New York.

The Maker Faire is an internationally recognized event in which "makers," meaning designers and engineers of all ages, exhibit their projects and research to the public. Though the criteria for projects are not well-defined, the convention as a whole strongly promotes the Do-It-Yourself (DIY) attitude, according to Glick. "It is a melting pot of creativity, art and engineering culture," he said.

Approximately 500 makers and 30,000 visitors attended the convention, which took place in the New York Hall of Science. The Blair team, one of the few high school groups to attend, demonstrated its Segway clone project every 20 minutes or so, and spent the rest of the time exploring exhibits. Projects covered all disciplines of creativity, ranging from the Life Size Mousetrap to bicycles constructed of bamboo. "That's the big idea of the Maker Faire," Kaluta said. "From your little hobbies and fun comes something cool."

In recognition of the Segway project, the Blair team received the Editor's Choice Award from Jake Spurlock, a web producer at MAKE Magazine. The programming and construction of the clone was a five-year-long process that began in Kaluta's robotics class in 2008. Kaluta said the inspiration came from a homemade Segway that he saw at a Maker Faire in California. "I brought the idea back with me," he said. "I thought it was a worthwhile project for robotics."

Kaluta began the project using parts from an old electric wheelchair, and students in the class spent the past five spring semesters assembling and programming the Segway and improving the clone's steering system, according to Kaufman, the project's lead programmer. "We had the hardware," Kaluta said. "We just needed to build the frame." Though many students have contributed to the project over the years, only four attended the fair.

Kaluta emphasized that apart from a few executive decisions, the Segway clone was entirely a product of the students. "I didn't intervene," he said. "[The project] was largely a programming problem and inverted pendulum problem."

Kaluta anticipates that students will want to attend the Maker Faire in the future and said that his class will casually continue working on the project throughout next semester. "The kids will want to go back, but it's sort of silly to take the same thing back," he said.