Annual event gives students a chance to learn from their forbearers

The event is held yearly and is generally well attended, according to CAP 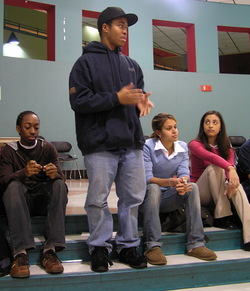 Photo: CAP Alumni Adedeji Ogunfolu from the class of 2005 speaks at CAP Alumni Night on Jan. 4.

Photo: CAP Alumni Adedeji Ogunfolu from the class of 2005 speaks at CAP Alumni Night on Jan. 4.

teacher Lansing Freeman. The alumni involved yesterday were all currently undergraduate students and had graduated Blair between 2002 and 2005, said Freeman.

In an informative exchange, the alumni, sitting on the stage of the SAC, fielded questions about their college experiences from teachers, parents and current students in the audience. The event began at 7:00 PM and lasted just under two hours, although some of the alumni left early. "They're going to see the Maryland game," said Freeman.

The alumni were eager to share their experiences after high school. Some told tales of the perfect college, where, as one 2003 graduate said, "everyone smiles all the time." For others, like 2003 Leah Cowdry, "everything… did not go as planned." Cowdry, who started college at Syracuse, transferred the next year.

Freeman says that the event will be held in a similar manner next year.