Before the game, the seniors walked out onto the field along with their loved ones before their last regular season home game as Blazers. The team came together for its seniors and was ready for the lesser Einstein team that was without its top receiver and opening week quarterback. "It's important because it's their last home game and we want to make them really proud to be on Blair football," said junior Eric Zokouri.

The Blazers started slowly, after starting off the game off with a fumble they managed just seven first quarter points. The score came on the Blazers' second possession, as they drove past the Titans' weak defense with ease. At theEinstein ten-yard-line, Desmond Colby completed a short pass to wideout Cliff Carter, who ran in for the first touchdown of the game.

At the end of the quarter, senior Chris Green picked off a pass from the Einstein quarterback, his first interception of the game. In the second quarter, the Blazers offense took it to the Titans. It was capped off with another pass to Carter, this time a short pass to the sideline. On their ensuing possession, Blair scored their third touchdown of the game. Omari Brooks ran over fifty yards after catching a pass from backup quarterback Jack Moore. All day long Colby and Moore had no trouble from the weak Titans defensive line due to strong play from the offensive line. "We knew our assignments and we just did what we were supposed to do," said senior offensive lineman Tyler Kang. 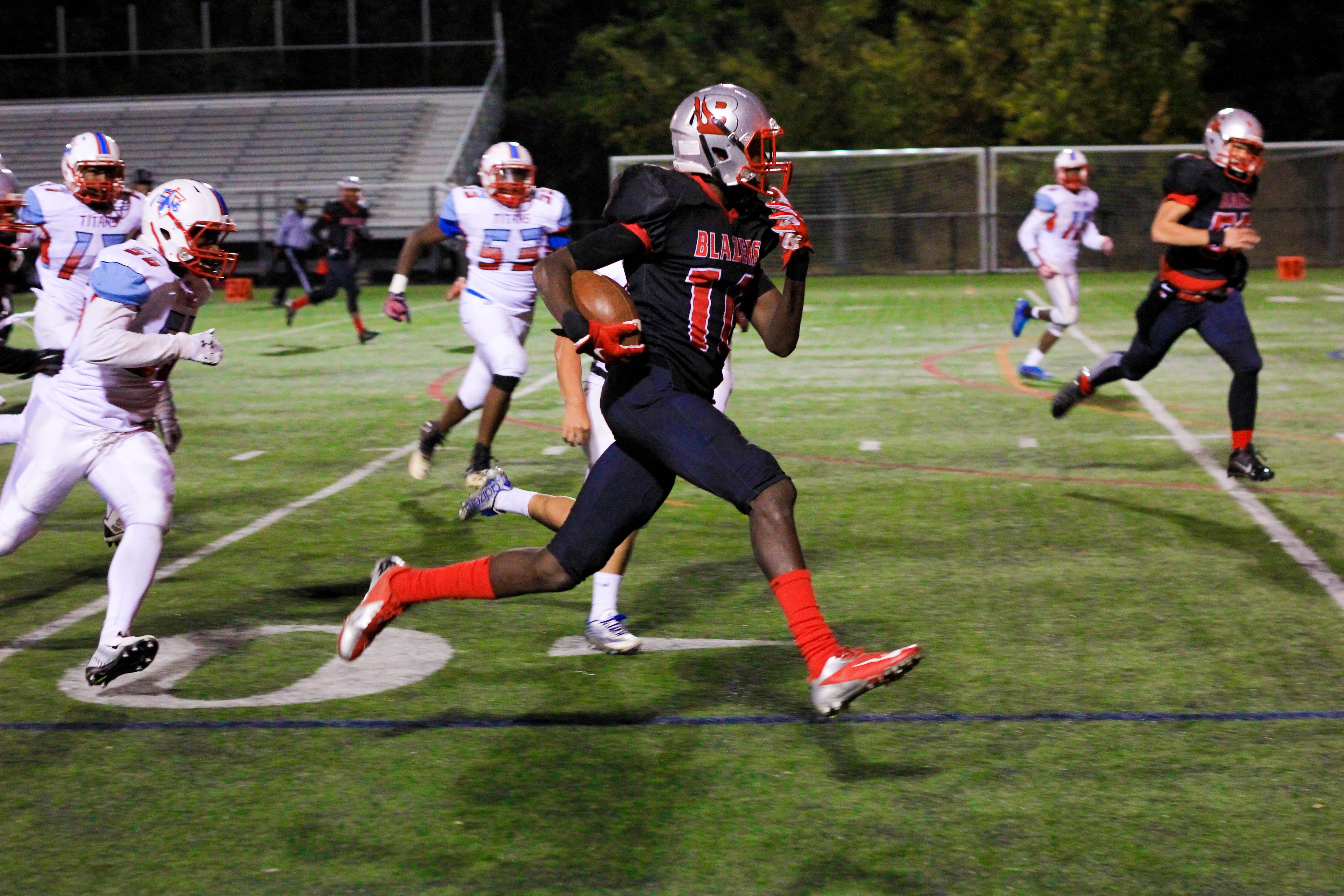 Photo: Senior Chris Green runs back an interception in the second quarter.

The Titans moved the ball on offense with long possessions, but couldn't capitalize on their drives. The stout Blair defense used two second quarter turnovers to score two more touchdowns before the end of the half. First an Einstein fumble was recovered by the vicious defensive line, putting the offense back on the field. Colby dropped back near midfield and threw a short screen pass to Zokouri, who wove through multiple Titans defenders to score the long touchdown. "Our playmakers were making the plays they were supposed to make and everyone was just doing their jobs well," said Kang.

On the next defensive drive, Green made a play on defense to allow himself a chance to score on offense. As soon as the Titans quarterback dropped back, he was surrounded by the defensive line. In response he threw up a pass toward the Blair sideline, with none of his receivers near him. Green settled underneath it and returned it down to the one-yard-line. With time winding down, Colby took shots at the end zone, and as time expired Colby hit Green in the corner. Green leapt up and reached around his defender to haul in the slightly underthrown pass. "It's important to have leaders on the field, and we have several of them, not just Chris who can make the big plays, we've got four or five guys who can make things happen," said head coach Andrew Fields.

The seniors looked back on their play over the last four years, fought their emotions and won their last home game with their classmates. "It's our last home game, the last time playing here
and most of us have been playing football for four years now, and this field means so much to us," said senior cornerback Ty Cao. 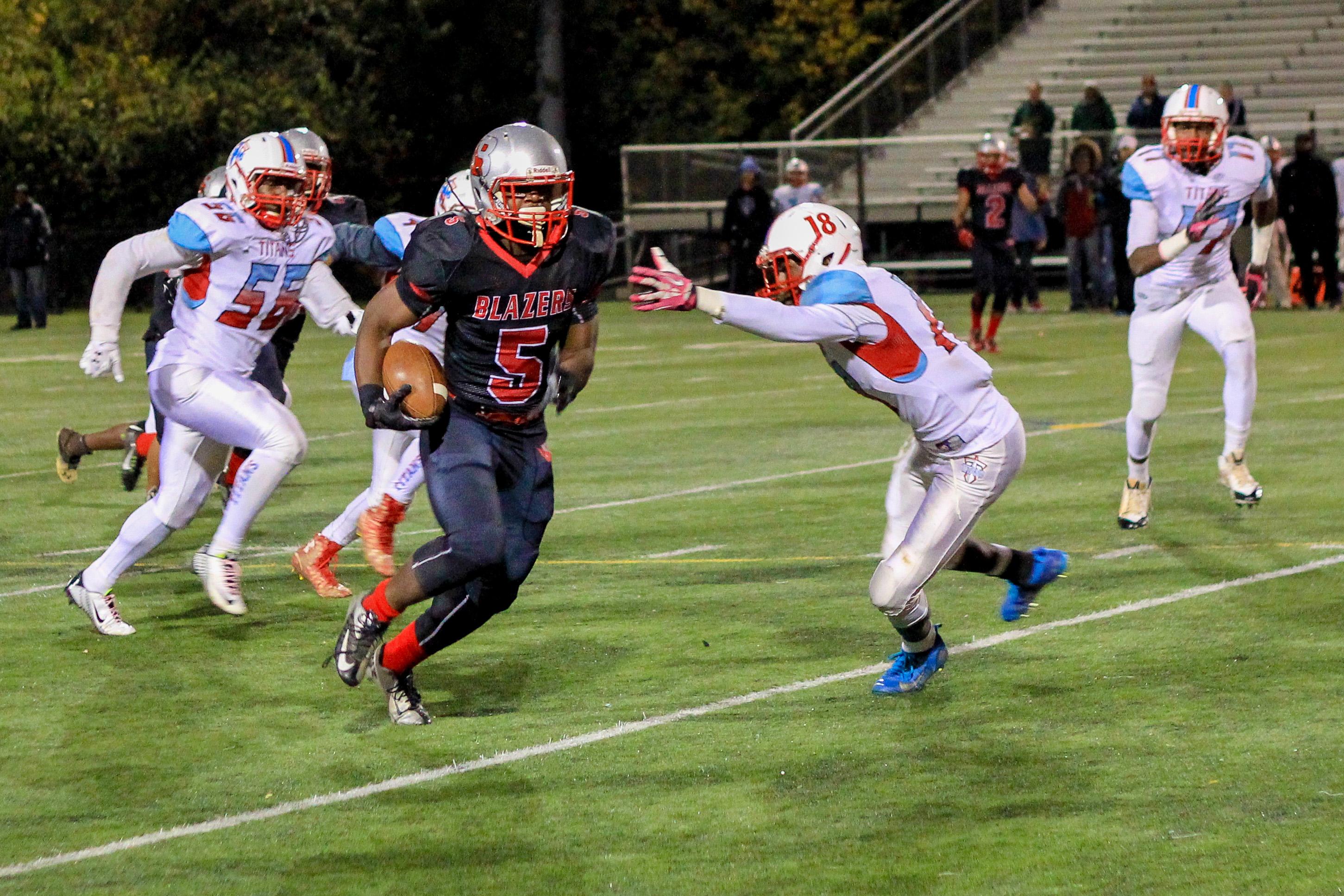 Next week the Blazers face off against the Damascus Swarmin' Hornets (9-0), who are one of just two remaining undefeated teams in Montgomery County. Coach Fields knows that his team will have to study hard and catch the Hornets off-guard next week. "Well, they're the best team in the state, so we're gonna have to be at our best and hope that they're not."