The Blair girls' varsity volleyball team (2-3) beat Springbrook in dominant fashion. The team played speedily, displaying great techniques and skills that led to gaps in the scores of all sets – 25-17, 25-15 and 25-19. The Blue Devils could not combat the fire the Lady Blazers played with, pouring only a waterfall of mistakes, mishaps and miscommunication. 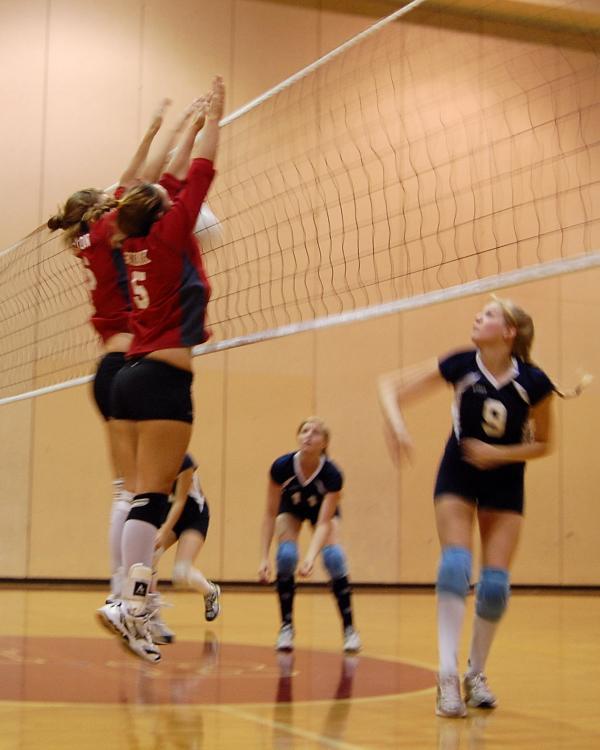 Photo: Senior Caitlin Ludington and junior Julia Skolnik team up to defend against a spike from the Springbrook offense.

Photo: Senior Caitlin Ludington and junior Julia Skolnik team up to defend against a spike from the Springbrook offense.  Photo courtesy of Julia Seiger.

The Lady Blazers found strength in playing together. "We played better as a team this game," senior co-captain Caitlin Ludington said. "It wasn't our best game, but better than the last game," Ludington added, referring to their previous loss to Watkins Mill on Tuesday, 3-2. Coach Chris Liang was proud of his team. "It was a good game," he said. "There was good team chemistry."

In the first set, both the Blue Devils and Blazers hit balls out-of-bounds to start, leading to a 3-3 score. After acute aces from junior co-captain Elaine Brice and junior Kaiti Hague, the Blazers lead 6-3. The Lady Blazers were able to jump ahead two more points, but a dropped ball and then a missed ball from Blair allowed Springbrook to narrow the gap to 8-5. With solid serves from Hague and strong blocks from junior co-captain Sibyl Brown, the Blazers continued to add on to the score, building an 11-6 lead. Springbrook was able to earn a few more points off of some errors by the Blazers, narrowing the gap to four points.

The Lady Blazers committed a few more mistakes, including sloppy serves and some net faults, bringing the score to 15-12. But the Blazers were resilient and through solid teamwork built a 21-12 lead. Springbook could not return serves from juniors Chloe Sheridan and Caitlin Schwindt, allowing the Lady Blazers to secure the first set, 25-17.

The Lady Blazers lead the second set early with the score at 3- 0 after Springbrook missed balls. After a dropped ball and an out-of-bound hit from Blair, the Blue Devils hit an ace, decreasing their deficit to one point at 5-4. Springbrook began to gain momentum after sloppy serves from Blair but still trailed by one point with the score at 8-7. The momentum stopped as the Blue Devils could not defend their side against hard hits from the Blazers, including strong blocks from junior co-captain Sibyl Brown and speedy spikes from Hague, giving the Blazers a solid lead with the score at 16-8.

Overall, the Lady Blazers showed high spirit in the third and final set. After some sloppy serves and missed balls by Blair, coupled with net errors from Springbrook, the score was tied at 3- all. Both teams continued to exhibit some mistakes, but even more weak and out-of-bound hits from Springbrook kept Blair in the lead, 9-6. The Blue Devils were plagued by bad communication on the court, allowing the Blazers to double their lead with the score at 14-7.

With some net errors by the Blazers, Springbrook narrowed the deficit slightly with the Blazers on top 16-10. Great passes and effective teamwork from the Blazers, including an ace from Ludington, gave the Lady Blazers a 20-12 lead. Blair continued to keep their energy at a high level down the stretch with great blocks from Brown and steady spikes from Schwindt and Hague. The Blazers walked away with the final set, 25-19.

"The team chemistry was a lot better than it has been," Brown said.

"Everyone got into play, showing great passing and setting," Sheridan said.

The girls varsity volleyball team plays its next home game on Thursday, Oct. 2 against Wheaton at 6:30 p.m.