Blazers blow up the Rockets

Coming off of a close win against Watkins Mill last Friday, Blair varsity soccer proved that they are a force to be reckoned with after a 5-1 drubbing of the Richard Montgomery Rockets. In their second game of the season, the Blazers showed their cohesion on the field and played a strong game overall. 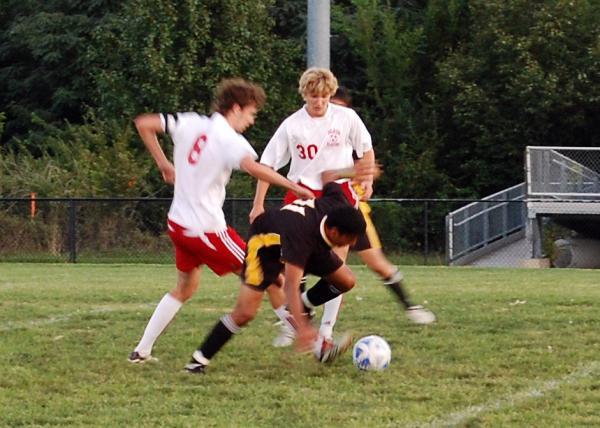 Head coach Adrian Baez was glad to see the powerful offensive and defensive effort that his team put into the game and was delighted to see them work together so successfully. "Defense put it up, midfield set it up and the forwards worked hard, " he said.

Baez was especially proud of his midfielders, who contributed all five goals. Senior co-captains Mike McClain and Mikey Funes scored two goals each and freshman Kevin Fallei added another in the final minutes of the game. Baez was impressed by Funes' "rocket shots into the goal," he said. McClain also played well, using strong moves to get numerous attempts on goal throughout the game.

Despite the abundance of passing early on, it took the Blazers significantly less time to get into the game and start dominating the field than in their match against Watkins Mill. The Blazers managed to take advantage of the Rockets' weak defense to put pressure on the goalkeeper. "They were like Swiss cheese in the back," Baez said.

McClain's first goal was scored in the 12th minute off of a free kick from junior midfielder Aaron Baldwin. Ten minutes later, Funes got a clean shot off and scored due to a penalty kick caused by a handball in the box.

In the 28th minute, Funes scored again when he dribbled the ball down the field and took a 20-yard shot, beating the Rocket's keeper near post. In stoppage time, McClain took a penalty kick and boosted Blair's lead to 4-0 before halftime.

During the second half, a miscommunication after a free kick by the Rockets led to Blair accidentally kicking the ball into their own goal. Regardless, the Blazers never lost control of the game.

Excellent passing and communication contributed to Blair's supremacy on the field. Funes, McClain, senior co-captain Greg Kohn, junior midfielder Otis Banwell, junior midfielder Eric Opsahl and senior striker Edgar Alvarado took a series of shots throughout the half, many of which narrowly missed the goal. Fallet scored the last goal of the game with an assist from McClain.

Baez was proud of the improvements that his team made from last game, even though he believes the Rockets were an easier team to beat. "We're really getting the cannons going today," he said.

In general, the team is proud to have another win for their season. McClain believed that this game was proof of the potential and talent that Blair soccer has this year. "We communicate well," he said. "Today we just played well overall."