Marching band and Blair Players to appear in high-profile film

Standing on the steps of the Scottish Rite Freemasonry, the Blair uniform-clad marching band plays their fight song while flag-bearing Players from "Beauty and the Beast" march energetically to the beat. Other Players join students from Paint Branch High School as majorettes in orange and cream uniforms, maintaining huge smiles as they perform a complex choreography with rifles. An entertained audience dances with the music. But the focus - of both the arbitrary bystander and the camera - is not on this grand spectacle but on a conversation between two seemingly inconspicuous people walking along the sidewalk - Russell Crowe and Rachel McAdams, two of Hollywood's biggest names.

Macdonald's purpose with the band and the Color guard is to recreate a famous photograph - a Canadian photograph, McAdams, a proud Canadian, emphasizes later - taken in the 1970s that featured majorettes twirling guns. Macdonald, who claims to find the picture "exotic" due to his British roots, feels incorporating the band and Color guard would provide an aesthetic appeal and appropriately accentuate certain aspects of the movie. "The theme of our film is partly about the military and the American life," he said, "so it seemed like having majorettes with twirling guns would comment on the place of guns in American society. And also it's just very colorful and beautiful and very American - like a piece of anthropology in America."

The life of a movie star

Marching band director Michelle Roberts was thrilled to represent Blair in "State of Play." "It's awesome," she said. "Any outside school opportunity would be a great experience for them and they'll remember it for a long time." Students, however, felt excited about the opportunity for other reasons. Before shooting, Blazers filled out a voucher to receive $130 as extras in the film. Then, they enjoyed an elaborate breakfast complete with make-your-own omelets, sausages, bacon, hash browns and, according to junior trumpeter Jonathan Gootenberg, "sixty types of steak sauce and five bottles of chocolate syrup and 10 different juices."

After a trip to the dressing room, where majorettes changed into costumes that were custom-made for each girl, it was time for hair and make-up. Although senior Tom Warner, who plays the trombone, finds the make-up experience "weird," he enjoyed the pampering. "I feel like a movie star right now," he said. "I'm very glad to have been in band. This makes it all worth it."

The shooting process, which essentially had two parts, did indeed involve hard work from the Blazers. First, the crew needed to set the visuals and audio of only the background, so Crowe and McAdams were not needed then. A couple of takes and a few close-ups of lucky students later, Blazers huddled from the cold in the temple's cardboard-covered interior - this getup was to maintain the pristine condition of the marble floors - and animatedly discussed the actors. One conversation involved Blazers arguing about whether or not Crowe resembles a teacher at Blair and chatter ensued when McAdams made a brief appearance. Freshman flag bearer Lindsay Rini is delighted to see Crowe. "I like Rachel a lot," she said, "but Russell Crowe is amazing. I loved him in 'Cinderella Man.'"

The second part of shooting involved Crowe and McAdams while the Blazers stayed in the background. After filming a few takes of both the music and the dialogue, the band had to pantomime playing so the sensitive microphones could pick up only the dialogue. During the editing process, a softer version of the background audio will be incorporated with the dialogue, according to the crew.

For what was probably a minute-long scene, take after take in various camera angles was required. Blazers were exhausted after two hours and for many, their excitement was exhausted as well. "It's kind of exciting but it gets old after a while," junior Joe Gilbert, who plays the saxophone, said. "It's very repetitive. And it's cold."

Others have gained more appreciation for the film making process. "I definitely learned a lot being on the set," senior trumpeter Kalisha Holmes said. "I didn't know movies were that hard to make. It makes me appreciate it more, every movie that comes out."

Both actors hope the film can answer their questions about the journalistic experience. "I wanted to explore the ambiguity of journalism," Crowe said. "In my life it has great effect. It's a kind of a conceit that journalists live under, that they remain objective. That's never been my experience. They're all too human, all too emotionally affected. Someone could write absolute rubbish about you because their aunty's having a problem with cancer or something. It's the way they re-balance themselves. So I think examining that conceit and examining the true input of human experience in the journalism that we read, it was very interesting for me."

McAdams, on the other hand, is fascinated with how reporting had changed overtime. "I'm very curious about what has happened to journalism in this country," she said. "For my character in particular, she's a new breed of journalist who is very involved with the internet and [I'm curious] in uncovering whether that's as factual as an older way of reporting or not."

Although Crowe has two Academy-award nominations under his belt and one win for his role in the epic "Gladiator" and McAdams is a rising actress, popular especially amongst teenagers for her roles in "Mean Girls" and "The Notebook," the two looked surprisingly nondescript; Crowe was wearing a shabby coat and carrying a worn briefcase and McAdams was made-up more subtly than even some of the extras. "I'm very low maintenance in this film," McAdams said, as she teased Crowe about the routine three hours he spends in hair and make-up. Crowe hastily pointed out that the bulk of that time is spent hiding his extremely long hair, which he is growing out for his next movie, "Nottingham."

The scene they just finished was a transitional scene, where the two characters discussed two new leads and were about to interview individuals who might be essential to the case. According to the two actors, their characters are constantly at odds against each other. "We fundamentally see the story from different points of view," Crowe said. "I see it from a corporate point of view, she sees it from a personal point of view. There's a consistent battle between the two of us to try and find out which one of those points of views is right." 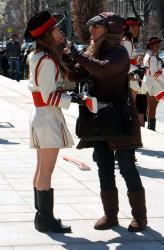 Photo: During breaks, the make-up artists come around and re-apply make-up to the gun twirlers.

Photo: During breaks, the make-up artists come around and re-apply make-up to the gun twirlers.


While their characters differ in views, McAdams and Crowe generally seemed to be in pleasant agreement. For instance, they both enjoy visiting the area. McAdams, who had filmed in D.C. for her role in "Wedding Crashers" four summers ago, thought it was "gorgeous" then. Now, she is looking forward to seeing the famous cherry blossoms that bloom with the emergence of spring. Crowe, who had been to D.C. numerous times, enjoys the town and the familiarity of the town that he has established. "I like the people here actually," Crowe said. "There's certain friendliness without being obsequious here."

From a directorial perspective, Macdonald enjoys the realness of filming on location. "When you film in the studio, you have to make everything," he said. "Whereas when you're here, you get great things for free. Suddenly you get beautiful flags, you get the blossom on the trees, the blue skies."

The two actors are also in concurrence with their impression of the band and Color guard. McAdams claims to be envious. "They're fantastic," she exclaimed. "It's a really lovely backdrop to the scene."

Despite making jokes about how some of the majorettes were too distracted by McAdams's shoes, Crowe believed the students to be well-disciplined and to have played very well. "It's an extremely tedious gig as they've now come to realize and they've done remarkably," he said. He also feels the unyielding weather that so many have complained about has added to a magnificent background. "[The winds] may have have been uncomfortable," Crowe said, "but the way they were moving the flags and the feathers on their hats, it'll read beautifully on screen."

Although many Blazers were disheartened to have not met the stars, Kandemiri is content with being a part of the film and meeting the director. "I was more excited about the opportunity to be in the movie then to meet [Crowe or McAdams] because I knew we might meet them but we might not," she said. "It's just cool that we got to see them in person." Kandemiri merely enjoyed sharing the memorable moment with her peers. "It was fun that I got to be with my friends," she said. "I know nothing like this might...happen again."