NIST holds viewing as planet crosses in front of sun

On Tuesday, the National Institute of Standards and Technology (NIST) hosted a presentation in the Blair auditorium on the transit of Venus, followed by a viewing as the planet began to pass across the sun. The transit occurs only four times every 243 years and the next one will not occur until 2117. 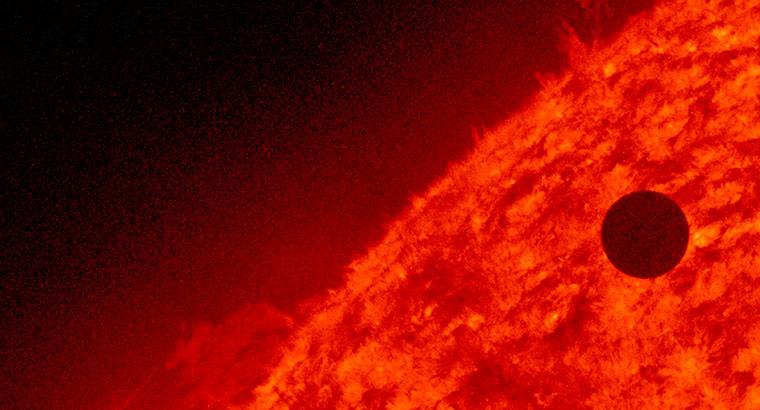 Photo: Above, Venus as it transits around the sun. The next one is expected to occur in 2117.

Photo: Above, Venus as it transits around the sun. The next one is expected to occur in 2117.

Before Venus began its transit, viewable from Blair at approximately 6:03 p.m., astrophysicist Stephen Redman gave an hour-long presentation on the history of this occurrence and its implications. The Venus transit has been recorded only seven times since 1639, with the first sighting made by astronomer Jeremiah Horrocks.

Since then, astronomers have discovered a pattern of its occurrences. According to Redman, the transit happens twice consecutively separated by eight years, followed by a 121.5 year absence and then two more occurrences separated by eight years, followed by another 105.5 years absence. The irregular pattern is due to the unevenness of the planes on which Venus and Earth orbit the sun.

According to Redman, at the time of the first sighting, the Venus transit was used to gather unprecedented information about the distance between planets and the sun. There are easier ways to do that nowadays, but the transit is still useful as it could potentially lead to the discovery of exoplanets – planets outside of our solar system.

Redman explained this in his presentation to a packed audience in the Blair auditorium, with joyous outcries from the crowd after every few movements of Venus. Redman credits the intricate history of the occurrence as an explanation for why it elicits this reaction from people. "I think the historical context of the transit of Venus really gets people excited," Redman said.

Blair was chosen out of a group of high schools because of its large auditorium but more importantly, due to its math and science community that was sure to come out for the presentation. "We brainstormed about different high schools in the area and I think we found a real winner," Redman said.

Redman also believes that it is very important to teach young people about the world outside of Earth. "Transits are one of the ways that we can learn about other exciting places. It's about the universe we live in" Redman said.

The original plan was for the audience to watch a live stream from a telescope on top of the Blair roof, but as the clouds rolled in that became impossible. Instead, streams of viewings from locations all around the world were projected onto the screen.

While Redman actually prefers it that way, as he says that the technology is significantly better from professional observatories, he understood that the audience was very excited to see it for themselves. "They wanted the glasses, they wanted to run out, they wanted to see it with their own eyes," Redman said. Regardless of the weather, solar filters, which allow for safer viewing of the sun, were passed out to the audience.

Redman wanted to impart a bit of his passion for astronomy to the students in the crowd. "You could spend your whole life just focusing on Earth missing all the good stuff," he said.