Blazers demolish Cavaliers in near shutout

The Blair girls' varsity lacrosse team (5-3) trounced the Kennedy cavaliers (0-8) by a score of 18-1. The Lady Blazers took hold of the game from the beginning and never relinquished the lead. 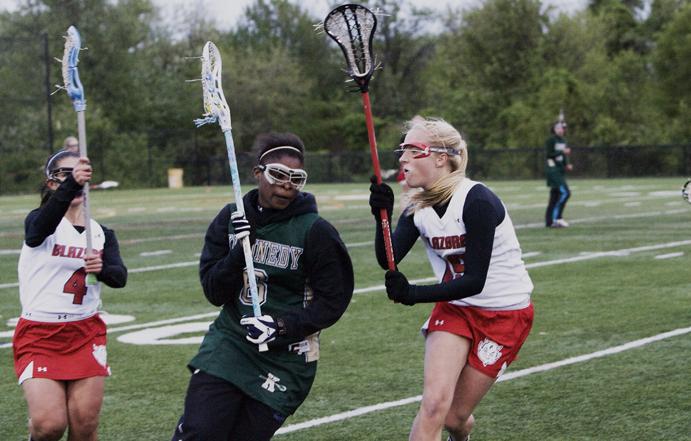 Photo: Juniors Caren Holmes and Zoe McCarthy were both key players in the Blazers gaining a quick lead and never relenting.

Photo: Juniors Caren Holmes and Zoe McCarthy were both key players in the Blazers gaining a quick lead and never relenting.

Blair first got on the board when senior co-captain Rachel Smith scored within a couple minutes of the start. A few minutes later, junior Caren Holmes scored. Holmes promptly scored again as she won the faceoff and immediately sprinted down the center of the field and scored to begin a stretch of three straight goals, earning her a traditional hat trick.

The Blazers were led by Smith who had five goals in addition to two assist and Holmes who also scored five goals. But the girls also had additional support from senior co-captain Julia Lewando and junior Allison Whitney who each had two goals. The lead was already 10-0 at half time and was extended to 12-0 before Kennedy ended the shut out.

At times the Blazers dominated the game to such an extent that the Blair defenders had ample time to chat with each other and the Cavalier attack. The lone Kennedy goal came on a funny bounce that ricocheted off of senior Molly Flannagan's goalie stick and dribbled into the net.

Junior Lisa Bianchini, who also contributed a couple goals, helped the team out greatly with her hustle and speed. Bianchini won multiple ground balls earned solely with her speed and was able to evade defenders as she moved the ball . Junior Zoe McCarthy also chipped in with three assists.

Flannagan agrees that there are always ways to work harder and become better on offense. "With our shot selection we didn't fake and didn't expect the goalie to move and stop the ball," said Flannagan.

Coach Horne believes that if the Blazers prepare adequately for these upcoming harder games, they will be able to hang tough with some of the best teams in the county. "It's a key of knowing who we have and how we'll play them and then work on that. Springbrook has a tough defensive zone and Whitman's a tough run and shoot, more traditional team," said Horne.

Holmes believes that the team will continue to grow as their experience builds. "We've got big games coming up and we've got room to grow. We're a young team, but they're stepping up and helping out," said Holmes.

But Horne believes that there is one main thing will help the team throughout the rest of the season. "I'm liking the teams aggression a lot lately," said a chuckling Horne.

The varsity girls' lacrosse team will play its next home game against Einstein at 5:15 p.m. on Thursday, May 3.