The Blair varsity field hockey team got off to a bad start to their season in a frustrating 6-0 loss against the Poolesville Falcons. The Blazers were unable to muster a consistent offense and were forced to play defensively for most of the game.

At the first whistle, the ball was put into Blair's side immediately, but the team was able to hold off the formidable Falcons' attack for almost 15 minutes before an unguarded Falcon player tapped the ball into the net. The Blazer defenders became frustrated as Poolesville continued to swarm the circle, often overwhelming junior goalkeeper Maura Druhan and scoring three more goals in the first half.

In the second half, senior goalkeeper Jordy Goldstein performed admirably under steady pressure from Falcons, allowing just two more goals. The Blazer offense showed some promise and managed to move the ball up field, but was generally unorganized and could not capitalize on the few opportunities they had to make shots on the goal. 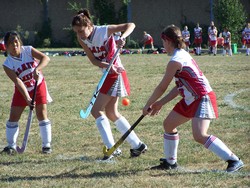 Photo: Blair has trouble communicating on the field, one of the factors that contributed to their loss.

Photo: Blair has trouble communicating on the field, one of the factors that contributed to their loss.

On defense, the girls suffered from a lack of coordination, as they often left Poolesville attackers wide open and tended to crowd the ball. Senior captain Sydney Valdez had a laundry list of skills the team has to work on in practice this week. "Communicating, passing, and transitions from defense to offense," all need work, she said.

According to coach Brook Franceschini, this was the toughest game the team will face this year, as Poolesville is a "fast-paced team with excellent stick work." In addition, many Falcon players participate in year-round club teams and the team made it to the semifinals of the Maryland state playoffs last year.

The Blazers have little experience playing as a team, and therefore need to work on communication and placing. However, the seniors on the team provide leadership and support. Valdez and fellow senior Anna Chiplis played strongly on defense, breaking up many scoring opportunities and charging attackers. Senior captain Julie Spatz played well on offense, making aggressive runs down the wings and assisting in the midfield.

The team is ready to learn from the loss and improve in preparation for their next game at Blake on Saturday, Sept. 17 at 10:00 am.