As the clock wound down, a frustrated Blair varsity girls' basketball team had been worn down by a short-benched, but taller Kennedy team. The Blazers lost 40-31 in a long game marred by turnovers from both sides as the Cavaliers pulled away late in the third quarter to grab the win on Tuesday night.

Right from the tip, Kennedy, playing with just eight players, established themselves as the bigger team. Turnovers were a common theme throughout the game, and the first quarter was a good example. The teams combined for just 11 first quarter points, and Blair could not penetrate the tall Kennedy front court. Both of Blair's first quarter baskets came off long two pointers from senior Camille Estrin and junior Lauren Frost.

Free throws played a prominent role in the game. The teams sent each other to the line a combined 22 different times, making the line a difference maker in the score. Blair knew they were at a disadvantage in size, but still could not execute the gameplan. "On defense we tried to front them down low, but they lobbed it over and no one was there to help, so we got into foul trouble," sophomore forward Nora Olagbaju said. 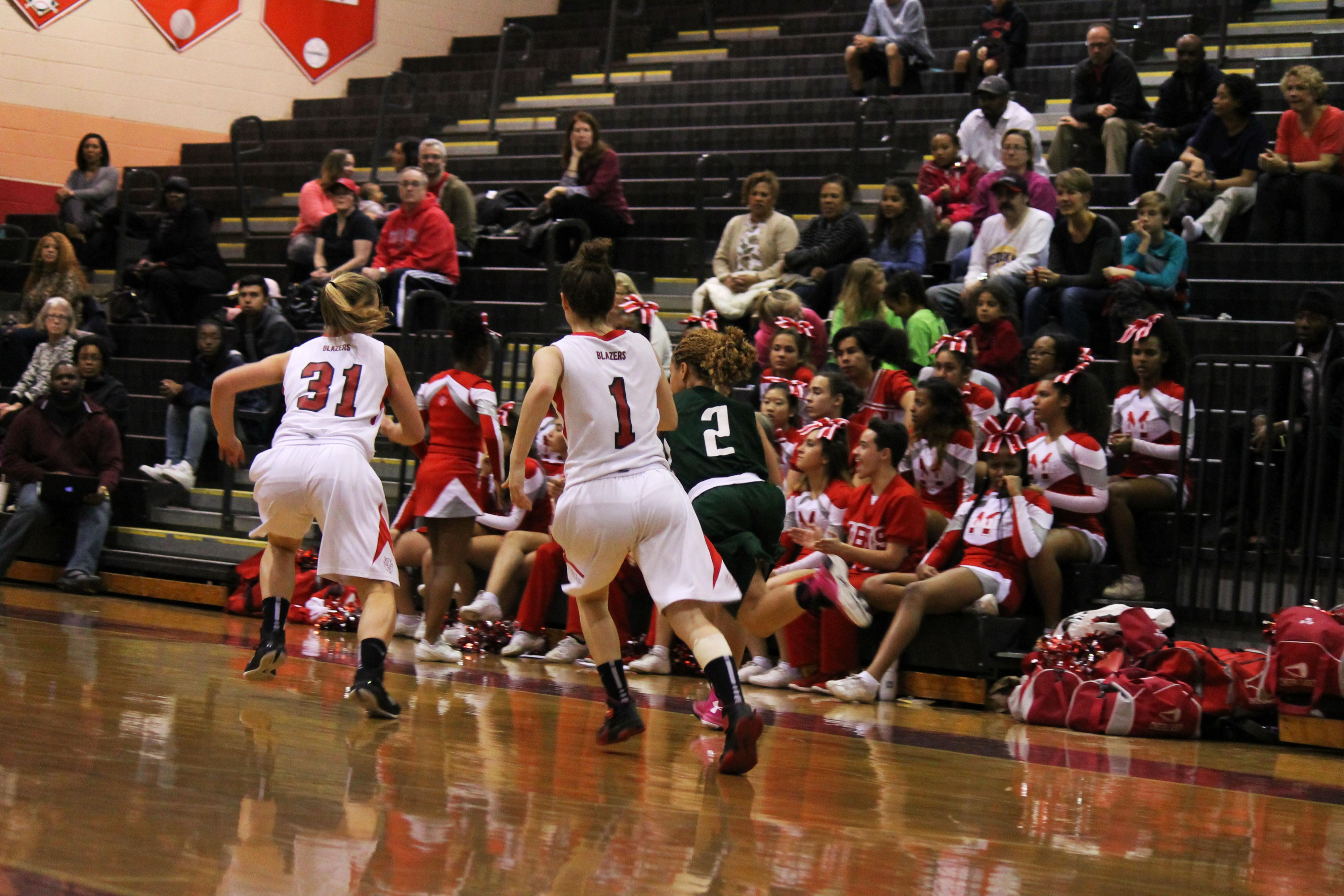 After a slow first quarter, the scoring picked up a bit, but turnovers were still numerous. The teams traded turnovers, and Blair launched a full court press on the Cavaliers. With the game tied at six, the Kennedy forwards took over the game, grabbing offensive rebounds and forcing their way to the free throw line. Blair kept itself in the game as halftime neared when they subbed in Faith Sharp, who gave Blair some energy as time wound down. Sharp made a long two-pointer and sank two free throws to tie the game back up at 15 apiece, and the game went into halftime with Blair down by two.

The Blazers had a lot of trouble corralling the bigs of Kennedy when it came to rebounding. "We were boxing out inconsistently, some plays we would some plays we wouldn't. If we're not all picking up the slack on the boards, it's easier for them to grab rebounds over us," Olagbaju said.

Blair came out of the half with more energy, and they took their first lead on a fastbreak score by senior captain Camille Estrin. More turnovers followed, as Blair collected a few steals, but found nothing on the offensive end. Then Kennedy took advantage of their strength at the guard position and began to pull away, ending the quarter on a 9-2 run. Kennedy's guard made a strong drive after strong drive through the Blair defense, finishing past Blair's bigs or getting to the line. "The Kennedy guard is a good player, we tried to put senior Alexis Moses on her at times, but she still got to the basket, she's crafty and the help didn't come in time since she's so strong coming to the basket," coach Carlos Smith said.

More of the same followed in the fourth quarter, with free throws and turnovers for both teams. The frustration for Blair was clear, as after a Kennedy and-one, Blair committed an unforced turnover, and gave Kennedy the ball right back. Even though Kennedy made turnovers of their own, the Blazers could not capitalize. Down ten, Estrin poked the ball away from the Cavaliers and was fouled, but it was too late. At one point, the teams made four turnovers in a row after Blair began a full-court trap. The game ended 40-31, with the Blazers being taken down by the taller team. Coach Smith recognized that going up against a bigger team would require strictly following the game plan. "We were looking too much at the ball on its flight toward the basket, so we couldn't box out as well as we needed to, but they have a few more experienced players, so you've got to give Kennedy some credit," he said.