After two uninspiring losses on the road to Kennedy and Einstein, the Blair varsity girls' basketball team made their home debut on Friday night as underdogs against the undefeated Northwest Jaguars. But the Blazers stepped up all aspects of their game, maintaining a solid defense and generating enough sparks of offensive prowess to battle the Jaguars to a close 47-43 loss. 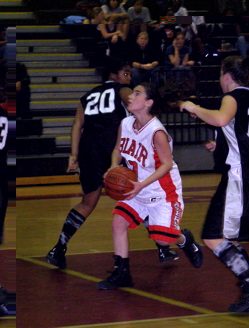 Photo: Point guard Jenny Williams goes to make a shot in the game against Northwest on Friday.

Photo: Point guard Jenny Williams goes to make a shot in the game against Northwest on Friday.

Much of the Jaguars' success comes from sophomore center Devin Green, a domineering six-foot presence in the paint. To stop Green, Clay instructed the Blazers to "take the ball into [Green]" to make her commit fouls. Blair's game plan worked as Green scored 15 points in the first half but managed only three in the second.

Unlike their first two games, the Blazers started strong and jumped out to a 6-1 lead in the first four minutes of play. Sophomore point guard Jenny Williams dribbled through the lane for two and junior center Sara Ramsey added four points before Northwest responded. Blair's aggressive defense, anchored by Ramsey and junior Regat Buluze in the paint, kept the Blazers on top as Blair's offense struggled to control the court and generate good shots. The quarter ended with the Blazers ahead 8-5.

The Blazers maintained their lead until the final minutes of the second quarter, when a 10-0 run by Northwest put the Jaguars ahead 22-17. As the third quarter wore on, the Blazers came within four points of Northwest but were unable to take back the lead, ending the quarter down 31-37.

The six-point deficit increased to ten as the Jaguars picked up momentum, opening the fourth quarter with two quick buckets. Senior center Ebony Winfield responded for Blair, scoring two of her 13 points on the night, but Northwest stayed ahead 43-33. After a Blazer timeout, Williams made a defensive steal and drove down the court, beating a Jaguar defender one-on-one for a lay-up. Several plays later Williams broke through three defenders in the paint for another lay-up, bringing the score to 43-37.

After a basket each from junior Kalisha Holmes and senior Helen Denbow, the Blazers found themselves down by just three points. But hopes of a comeback diminished when the Jaguars nailed a three pointer, bringing the score to 41-47 with less than one minute left in the game. The Jaguars swung the ball around the perimeter on offense to run down the final seconds, giving the Blazers one final play. Williams drove the ball down the lane and faked past a defender before pulling up and knocking down a jumper, bringing her game total to 14 points.

Junior co-captain Meghan Cadigan attributed the Blazers' solid performance to their aggressive defense. "The best thing we did tonight was our defense and the offense came from that," she said.

While the Blazers excelled on defense, they struggled to control the ball on offense and move it among players to generate better scoring opportunities. "We need to work on passing more to get the defense off balance," said Holmes.

Despite the final score, the Blazers played what Denbow called their "best game so far." As a young team with only one returning starter on the floor, Williams, Blair's improved performance on Friday night showed the potential the team has regardless of its inexperience.

The girls' varsity basketball team plays its next home game on Dec. 19 against Springbrook at 7 p.m.