The Blair field hockey team was defeated this afternoon 4-0 by the last year's divisional champions, the Springbrook Blue Devils. Led by their seven departing seniors, the Blazers played well against a difficult opponent but were hurt by a lack of cohesion and aggressive play. 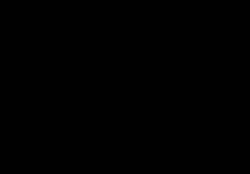 Similarly to previous games, the Blazers (1-7-1) put forth a solid defensive effort but could not put the pieces together on offense. They had trouble clearing the ball from their side of the field, resulting in the game being played almost entirely within the Blair 25-yard line. The Blazers failed to capitalize on their few scoring opportunities due to a lack of consistent shooting and follow-ups.

The Blue Devils took control of the game from the beginning, dominating possession and keeping the ball inside the Blair circle for most of the first half. The Blazer defenders made a valiant effort in keeping the ball out of the net, but could not last against the relentless Springbrook assault. The Blue Devils scored first on a flick shot that rolled over the top of senior goalkeeper Jordy Goldstein's glove and into the cage.

The Blazers continued to put up a strong effort, having some success in moving the ball up the field, but these plays were isolated and often fell apart due to a lack of proper spacing and teamwork. The Blue Devils maintained their attacks on the goal, and scored again late in the half on a fast break that caught the Blazers by surprise.

In the second half, Springbrook continued to display their teamwork and assertive play, further dominating possession and keeping the ball far from their goal. The lady Blazers continued to play hard and had flashes of brilliance, but were simply outmatched by the perennially strong Springbrook team, who scored twice more in the half to lock up the game. 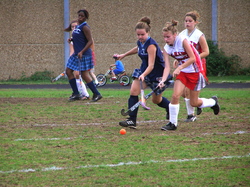 Photo: Junior Zoe Norvell beats her opponent to the ball during the Blair v.s Springbrook game on Oct. 15.

Photo: Junior Zoe Norvell beats her opponent to the ball during the Blair v.s Springbrook game on Oct. 15.

Playing in the final home game of their high school careers, seniors Goldstein, Anna Chiplis, Christine Hayek, Emily-Kate Hannapel, Sydney Valdez, and Julie Spatz all played strong games and made a good effort. Chiplis and Hayek coordinated a strong defense and held the Blue Devils to relatively few goals, even without the help of fellow senior defender Jenny Jones, who missed the game due to a broken nose. Valdez had one of her strongest games of the year, with strong hits and smart, aggressive play.

Blair was plagued by the same problems that have hurt them all year. They often played passively, waiting for the ball instead of rushing and taking control of the game. They had only four shots on goal, and did not follow up on them. "We held our own against a tough team, but we continue to have the same problems we've had all year," said Valdez.

The Blazers will play their next game at Einstein this Tuesday, Oct. 18 at 7 p.m.