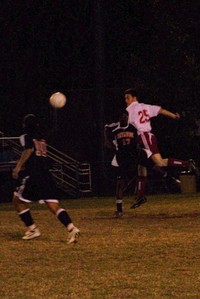 Photo: Senior Tim Visclosky heads the ball during the first half on senior night against Northwood. The Blazers won, 3-1.

Photo: Senior Tim Visclosky heads the ball during the first half on senior night against Northwood. The Blazers won, 3-1. Photo courtesy of Julia Seiger.

The offense of the Blair's varsity boys' soccer team finally clicked on Tuesday, giving the Blazers their first home win of the season, a 3-1 victory over Northwood on senior night.

The game started slowly as Blair played all their seniors in the starting lineup. The Gladiators maintained control of the ball in the opening minutes of the game as Blair could get nothing going. "We started slowly because our seniors are not our strongest players," said head coach Adrian Baez. "But when we subbed in our main guys, the offense clicked."

After fruitless passing and dribbling by both teams, the Blazers subbed back in their regular starters 25 minutes into the half. The impact was felt immediately as junior forward George Noubossie took a well-placed shot from outside of the box, but was denied by the Gladiator's keeper.

Late in the half, the Blazers went on an offensive surge in which they were able to string together a long series of accurate passes. This ultimately ended in a beautiful shot and goal by senior co-captain midfielder Sergio Quisquinay from 20 yards out, Blair's first home goal of the season. Senior co-captain defender Jonathan Safer was very pleased by their first goal. "We finally put the ball in the net," he said. "It felt so good." The half concluded after neither side could follow up on any passes. 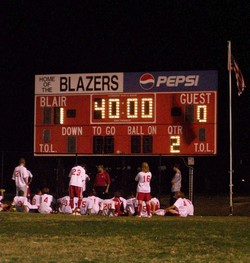 Photo: The scoreboard at halftime shows the first home goal scored by the Blazers all season.

Photo: The scoreboard at halftime shows the first home goal scored by the Blazers all season. Photo courtesy of Julia Seiger.

At the start of the second half, the Blazers came out rolling. They dominated the first ten minutes of the half, sending many balls into the box and creating multiple opportunities, none of which resulted in goals.

The Blazers found their next goal 28 minutes into the half. Safer sent a free kick from midfield into the Gladiator's box, where senior defender Edwin Melendez was able to control it and deliver a nice pass to junior forward Erick Hernandez, who tapped it in from three yards out. Baez immediately replaced senior co-captain goalkeeper Jonathan Fortuna with junior Alexis Castillo.

The Blazer defense held strong for the next few minutes, defending off multiple Northwood attacks. However, with five minutes left in the game, the Gladiators launched a rocketing shot past Castillo for a goal. Castillo was injured on the play and Fortuna was brought back in.

But the Blazers ended all hopes of a comeback when Quisquinay made a spectacular run into the box in the closing minutes and found senior defender Ryan White in front of the goal, who tapped it in and gave Blair a 3-1 victory. 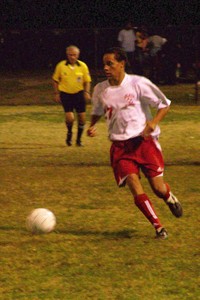 Photo: Sophomore Alexander Baldwin dribbles the ball towards the goal.

The team was ecstatic over their first home win of the season and are looking forward to the playoffs. "This win was real important to the seniors especially," said senior co-captain defender Tim Visclosky. "But it was not that meaningful in terms of our season and our record."

The coaching staff saw much improvement in the team during the second half. "In the second half we started to get more comfortable," Baez said. "We were relaxing and getting into the flow of the game. We loosened up and good things started to happen."

Baez hopes to ride the momentum off of this win into the playoffs. "We're looking to tighten up our markings and put the ball into the net like we did tonight. It should be interesting."