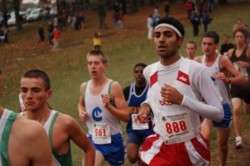 Photo: Junior Rutvij Pandya runs with the pack on his way to a 48th place finish out of 161 boys.

Photo: Junior Rutvij Pandya runs with the pack on his way to a 48th place finish out of 161 boys.  Photo courtesy of Christina Mullen.

The course at Hereford High School is known to be one of the hardest courses on the east coast. "It was the toughest course I've ever been on," said Pandya, who had never run the course before. "You had to get mentally prepared, there were a lot of hills and tight turns."

Saturday was Gretschel's fourth time on the Hereford course, allowing her to approach the race with experience and confidence. "It's a very hilly, difficult course," Gretschel said. "I tried to not take it too easy or too hard. I went easy on the hills so I had something left on the straight-away. A lot of girls powered up the hills and I passed them." 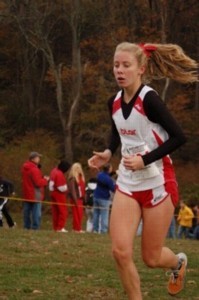 Photo: Senior Johanna Gretschel placed 28th in a field of 146 girls at the Maryland 4A State Meet.

Photo: Senior Johanna Gretschel placed 28th in a field of 146 girls at the Maryland 4A State Meet.  Photo courtesy of Christina Mullen.

After the race, the athletes were euphoric about their performances. "I think it was my best race this season. I was most physically and mentally focused this race," Gretschel said.

Pandya also reflected positively on the race, but noted room for improvement. "It felt good, it was a really tough course. I tried to get out not too fast but my legs started hurting the last portion of the race," he said.

While Pandya and Gretschel were the only Blazers competing, 22 teammates and coaches came out to show their support. Coach James Demma applauded the pair's accomplishments. "Rutvij's and Johanna's times were excellent despite being the hardest course in the state of Maryland," he said. He also acknowledged the meaning that this race had for the team. "Last year 4 people came, this year 22 came. It was a team accomplishment," he said.

The captains were also very pleased with their teammates' performances. "I'm very proud of them," co-captain Vijay Baharani said. "I think their race speaks for itself," co-captain Frank Wen agreed.