Blazers get clawed out by Wildcats

Blair's girls tennis team dropped to 3-4 after losing 1-6 to the Walter Johnson Wildcats, suffering a string of decisive defeats from the currently undefeated Wildcats. 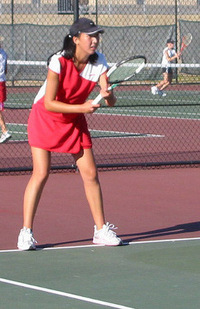 Salwan's position change has not been the only one this season. Blair has struggled in the previous weeks to even their playing field after losing three players to various injuries, with seniors Sarah Wolk, Kiran Belani and freshman Sneha Kannan out for an indefinite period of time. According to Coach David Ngbea, the unavailable players would have been important factors for winning previous and future matches, and he hopes that the players will be able to return for county tournament to help the team remain in Division I. The loss of the three players came unexpectedly and made various holes in the lineup, which forced him to move players up to replace the empty second singles player slot.

After Salwan's defeat, second doubles players sophomore Bonnie Ding and senior Kristi Chakrabarti and third doubles players senior Margot Pass and sophomore Priyanka Gokhale also left the court with tough losses, 7-5, 6-2 and 7-6, 6-4, respectively. On the other side of the court, the first singles player, senior team captain Stephanie Paul, also experienced difficulties against her opponent. After a heated match, Paul suffered a hard defeat at 6-0, 6-1.

By late afternoon, only two matches remained unfinished. Senior Pearl Horng, the second singles player, played an intensive, drawn-out match, although she eventually lost 6-2, 6-2. Despite the loss, Horng does not feel disappointed in her performance. "Of all my losses, she [WJ second singles player] was the best so far. I moved my feet and that's all I can say," she said.

The last match to finish after Horng's was the also the only match that the Blazers' won against the Wildcats. The first doubles players seniors Dominique Franson and Jahnavi Bhaskar played a tumultuous three sets. They lost their first set 5-7 after some shaky volleys and careless mistakes, but made a comeback and won the next two matches 6-3 and 6-0. Bhaskar attributed their rocky match to the different peaks of rhythm during the match, but they eventually pulled through for the only victory against the Wildcats. 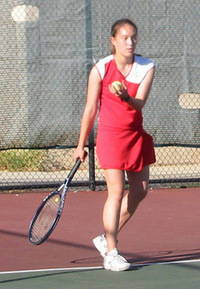 Even though the tennis squad lost by a large margin to the Wildcats, Paul maintained that the members on the team this year are very tough, especially since many of them are playing at a disadvantage with the missing players. Paul also said that she is confident in this season's games. "I am really excited, we have a very strong team this year… but a lot of our matches have been very close," she said. "Everyone is playing very well except they make a few mistakes that can affect the outcome of the match."

Ngbea also believes that the mistakes are a major reason for some of the losses this season. "I think we had our chances to win," he said, citing the Walter Johnson match and previous matches' results. He pointed out that aside from this match, the tennis squad's wins and losses this season have were either won or lost by a slim margin of one match. "We need to minimize errors, if we did, our chances will be very good." To minimize errors, Ngbea said that the team needs to improve their aggression on the courts, to work on finishing the point and to strengthen the volleys.

The girls' tennis team's next match will be at home on September 29 against Quince Orchard at 3:30 p.m.