Blair's JV field hockey team smashed the Rockville Rams Monday, improving their record to 3-1-1. The Blazers locked horns with the Rams in a nearly scoreless first half, but after a skillful goal with one minute remaining in the half, the Blazers knocked down their opponents with constant pressure on goal.

Blair opened against Rockville with speed and force, and the Rams could do little to keep the ball out of their territory. Early in the half, the Blazers led a charge into the Rockville circle, drawing a corner. This first offensive play of the game ended sloppily when the Blazers missed a clear opportunity to put the ball in the back of the net. 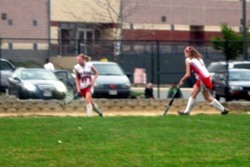 Photo: Blazers sprint down the field as Blair defeats the Rockville Rams 3-0.

As the Blazers fought for possession, they maintained a heavy presence near the Rams' goal allowing for many scoring opportunities which Blair failed to take advantage of. This tendency frustrated head coach Nina Hagan throughout the game. "This hesitation is not at all what I'm looking for, we need to get in there and make cuts," she urged her players.

After another corner shot by freshman midfielder Blake Morgan-Gamber cruised by the right post of the goal, the Blazers began to lose focus. The Rams capitalized on this, leading a counterattack that slipped by Blair defenders and nearly scored. This offensive surge jolted the Blazers back into the game and put the Blazers on the scoreboard for the first time with a goal from freshman forward Miranda Bernard 24 minutes into the game.

In the second half, the inspired Blazers quickly organized themselves and kept the ball on offense for most of the half. Four minutes into the period, Bernard scored the second Blazer goal, a short slap shot from close range.

Throughout the half, Rockville continued to fall apart at the sticks of Blazers. Morgan-Gamber slammed another ball into the back of the net, but it was recalled as an illegal shot from outside the circle. Undeterred by the withdrawn goal, Blair scored five minutes later on a shot by sophomore forward Samantha Lindt with an assist by Bernard.

As the game neared its end, Morgan-Gamber found the goal again, but the score was called back after officials ruled that the ball had hit a Blazer's foot before entering the net.

Hagen was pleased with the outcome noting that this was a major learning experience for Blair. "We learned today who can play what positions and who has to stay in their niche," said Hagen.

All three captains, Juniors Adelaide Waldrop, Neva Bowers and Jenna Craver, looked to the future after a confidence boosting win. Waldrop felt that the Blazers "had a sloppy first half, but this game was extremely good preparation for a tough game against Poolesville coming up on Thursday."

The Blazers' next home game is Wednesday, Oct. 3 against Wheaton at 5 p.m.