Blazers hold their own at the historic Penn Relays

As soon as he felt the crisp, cold metal of the baton slap onto his palm, senior Muhammad Roberson bolted from his expectant stance to sprint up the curve of the track. Salty sweat dripped down his brow, blinding his eyes as he caught the leader of the race. Halfway through the backstretch, Roberson suddenly felt a sharp pain in his hamstring. An aching grimace spread over his face as the pain intensified and Roberson wanted to stop, but couldn't – not in front of the 46,000 fans who had come out for the 113th annual Penn Relays Carnival. For the first time in over twenty years, Blair sent the boys' 4x100m and 4x400m relays to Philadelphia, joining a legacy of Blair faculty who have competed in the meet throughout the years.

The Penn Relays Carnival is a three-day prestigious track and field festival held annually at the University of Pennsylvania (UPenn) each April. The event is one of the world's best-attended track meets, behind only the World Championships and the Olympics. This year's meet drew a total of 109,525 people over the meet's three-day duration, according to the University of Pennsylvania. 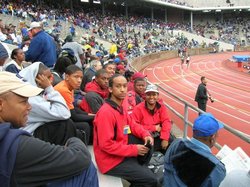 A historic event, the Penn Relays is the oldest annual collegiate track and field meet in the United States. At its inception on April 21, 1895, in conjunction with UPenn's Spring Handicap Track and Field Games, Penn Relays consisted of a single event: the collegiate 4x400 meter relay race. Since that historical first race between the UPenn Quakers and Princeton Tigers, the meet has evolved into an illustrious event featuring 119 different events at the college, high school, Olympic developmental, masters and Special Olympics levels.

The Blazers' trip marks the first time that a Blair team has competed in the meet since at least 1983, according to Dale Miller, who started working as Blair's Athletic Director that year. Miller is unaware of whether Blair teams traveled to the meet before 1983. All high school 4x100 entries are accepted into the meet but 4x400m relays must meet the qualification standard of 3:40 minutes in order to compete. Blair easily met the standard with their indoor track season record of 3:32.

Sophomores Jonathon Haughton and Chris Grindley along with juniors Mohamed Mansaray and Louis Varella competed in the 4x100m relay. In the 4x400m relay, Haughton and Varella were joined by junior Nilan Schnure and senior Muhammad Roberson.

The 4x400m team ran a personal best of 3:25, well ahead of their indoor state-qualifying time of 3:32. Haughton led off with a strong first leg to put the Blazers in the front of their heat. Schnure maintained Haughton's momentum and when he handed off to Roberson, the Blazers looked poised to win their heat as Roberson surged ahead of the pack.

However, a strain in his hamstring prevented Roberson from further acceleration. "I was coming on the final turn and my hamstring in my right leg hurt. I felt like if I went any faster, it would've popped," he said. As Roberson struggled to finish, several teams flew by before he could manage to hand Varella the baton. Varella ran a strong anchor, but the Blazers finished fourth out of thirteen teams in their heat.

The 4x100 team also finished fourth in their heat, but in a field of nine teams. Their time of 44.98 was close to their personal record of 44.2, but Haughton believed that a flawed baton hand-off from third-leg Varella to anchor Mansaray took valuable milliseconds from their time. Mansary did not start running quickly enough when Varella entered the exchange zone to pass him the baton, resulting in a collision.

"Muhammad didn't really get out. I ran into him and I had to bounce out of the lane," Varella said. The Blazers were in the first lane, so Varella was able to step off the track onto the grass and out of the way of incoming runners.

Haughton said that running in front of such a crowd was intimidating, but found that his nervousness resulted in faster splits. "I think that the intensity from the crowd had us pumped for our races and plus I was running in front of my people- Jamaica," he said.

The presence of foreign runners at Penn Relays is a legacy in and of itself. In addition to the thousands of athletes who flock to Philadelphia from every corner of the United States, the event is famed for attracting international runners. Jamaican high schools have a long history of taking home the coveted "Championship of America" title and plaque awarded to the winner of each event. Their boys have won 61 titles since 1964 and their girls have taken home 63 titles since 1979, according to the Jamaican newspaper, the Jamaican Observer. In another highlight, athletes from foreign countries such as Kenya, Germany and China take on American runners in professional races donned "USA vs. the World." 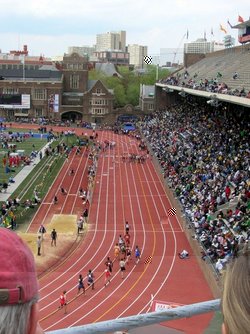 Photo: Around 46,000 people showed up to cheer the runners on at the annual Penn Relays Carnival in Philadelphia Photo courtesy of Nilan Schnure

Photo: Around 46,000 people showed up to cheer the runners on at the annual Penn Relays Carnival in Philadelphia Photo courtesy of Nilan Schnure

Varella said that the cheers from the almost 50,000 people in the stands motivated him to push harder. "The people there cheered for everyone," he said. "They didn't even know you." Varella also said that racing in front of such a large crowd was good preparation for the Maryland State Championship, which was held May 24 through May 26. "I was used to [the crowds] from Penn Relays and races from over the summer; Junior Olympics," he said.

Blair sprint coach Ralph Penn Jr. believes that the boys were able to block out the noise of the crowd and concentrate on their races. He views the meet as a positive experience for the Blazers. "I think the fact that we went will help the guys be more driven for next year," he said.

Masters in the classroom and on the track

Penn himself is an alumnus of the Penn Relays Carnival. Born and raised in Philadelphia, Penn was attending Germantown High School when he first competed at the Penn Relays.

Penn's most memorable experience at the Relays was in fact his first of many at the event, as a sixth-grader. He participated in races limited to Pennsylvania students, in which elementary and middle school children race each other up and down the infield. "It was my first time running in front of a crowd of 40,000 people in my hometown," he said.

Penn went on to compete again at the Penn Relays at the collegiate level as a student at Penn State. But while most athletes' accomplishments stop after college graduation, Penn's commencement ceremony signaled only the beginning of a lifelong commitment to running. "A couple years after college, I wanted to get back into running track," he said. "I did the research and found out [that] every city's got masters' track."

Masters is a category for athletic events for those over the age of forty. Those under 40 but over 30 years old can compete in the sub-masters division. Penn returned to compete at the Penn Relays about 10 to 12 times as a member of the Maryland Masters Track Club.

As Blair's Educational Facilities Officer, Penn is not the only member of the Blair staff to have found success on the track in Philadelphia. Blair dance teacher and former head track coach Heather Amell won the collegiate 400m hurdles in 1997. Competing as a college senior for Indiana University of Pennsylvania, Amell placed seventh overall, including non-collegiate competitors, in a time of 59.95, which remains a Pennsylvania State Athletic Conference record.

A sprint phenom at Port Allegany High School in Pennsylvania, Amell developed a penchant for hurdles. In her senior year of college, Amell qualified for Nationals in the 400m hurdles and was seeded as the third-fastest competitor. A torn Achilles tendon prevented Amell from running her best at Nationals but her win at Penn Relays earned her an invitation to train in Colorado for the 2000 Olympics. Though she ultimately decided not to pursue the Olympic dream, Amell has fond memories of her record run. "Penn was memorable," she said. "I was really nervous but it was exciting."

All returning members of the boys' relays that attended Penn Relays professed a strong interest in returning to the meet next year with more experience.

Varella said that the enormity of the meet threw the Blazers off in regards to warming up before their races because unlike at regular meets, athletes were not allowed to jog around the infield. "Basically you had to warm up outside [the stadium] on the sidewalk," Varella said. "We were in the stands [when the officials called our race]. We rushed and had to jump right in [to the race without warming up]."

Varella said that the experience, in addition to preparing the Blazers for a return trip next spring, prepped the boys for the rest of this year's season. Varella said that competing in a meet of such prestige gave him confidence for this past weekend's Maryland State Championship. "Seeing all the top athletes from around the world definitely opened my eyes a bit more," he said.