This year, Takoma Park established a Youth Council in order to include young voices in city politics. Blair students comprise five out of the nine middle school to high school Youth Council members. Each member will serve a one-year term and will have the option to reapply at the end of their term.

Morganstein joined the council because young people, who are being affected every day by the decisions made by the City Council, are beginning to have a say. "It's important for us to have a voice in decisions, and the council will be able to advise real City Council members on the issues that youths are interested in," Morganstein said. 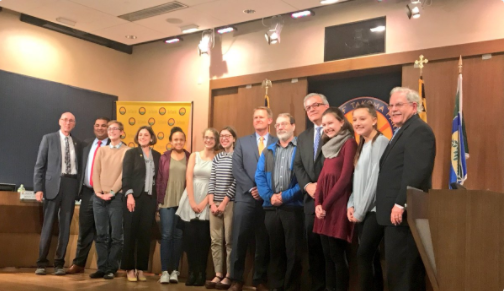 Photo: Both City Council and Youth Council members pose for a picture on November 15

Photo: Both City Council and Youth Council members pose for a picture on November 15 Photo courtesy of TKPK Twitter.

As a Youth Council member, McCabe plans to advocate for more open discussion between youth on current events in Takoma Park. To accomplish this, she will push for Youth Town Hall discussions, creating a safe space in which high schoolers can discuss their viewpoints and learn new perspectives. "School is a time where these ideas and these principles are all really pushed ... and that's something that we should think about when instituting some sort of program where we can talk about DACA [Deferred Action for Childhood Arrivals], and just how we can be better as the next generation," McCabe said.

Morganstein wants to increase the diversity of the Youth Council. "People of different backgrounds should work together, talk, hang out and be friends so we can really show how diverse we really are," Morganstein said.

The Youth Council meets once a month at the Takoma Park Community Center. While in its early stages, the council is working on advertising in order to open up more opportunities for high schoolers to get involved. The council is also looking for an official adult Youth Council Advisor and planning future meetings. Visit the official Takoma Park Youth Council website for more information.