Blair's JV field hockey team decimated the Wheaton Knights on Monday night in a one-sided match. After a disheartening loss at the hands of Poolesville, Blair tested new plays and re-positioned players, which proved successful in the victory.

The Blazers took the lead early when freshman Lauren Rust knocked the ball into Wheaton's goal four minutes into the game. After celebrating the swift attack, Blair added two more points to the scoreboard three minutes later with goals by junior co-captain Adelaide Waldrop and freshman Miranda Bernard.
Three goals down, the Wheaton Knights promptly called a time-out in hopes of salvaging the game. 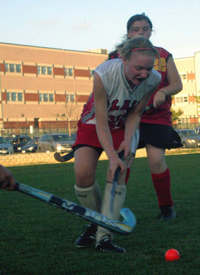 Photo: Junior co-captain Neva Bowers quickly maneuvers the ball around two Knights as she goes on the attack.

Photo: Junior co-captain Neva Bowers quickly maneuvers the ball around two Knights as she goes on the attack. Photo courtesy of Lucas Alvarado-Farrar.

While the Blazers huddled for a quick meeting, junior captain Neva Bowers reminded the team to "play strong, play fast and dominate the field." Heeding these words, the Blazers' onslaught continued with a goal by sophomore Lily Alexander eleven minutes into the half. Four minutes after Alexander's goal, Bowers snaked one through the legs of the defending Knights to put Blair up 5-0 and score her first goal of the season.

Stunned by Blair's impressive scoring ability, Wheaton could muster no offensive presence in the first half. On the other hand, the biggest Blazer scoring slump was nine minutes. Bernard continued to pummel the Wheaton goal, aggressively attacking the goal for her second goal of the game. Sophomore Samantha Lint scored that last goal of the half within the final minute, making the score 7-0 at the end of the half.

Instead of the usual pep-talk between halves, all coach Nina Hagen could do was smile and look at her clipboard. She was setting up new positions for the second half to allow the Blazers to try new tactics. "We can use this game to refresh our strategy and improve our skills. Let's use what we learn in this game for the future," shouted captain Bowers when Blair retook the field.

Despite the relaxed atmosphere at half time, the Blazers were still focused on their offensive strategy. In the second minute of the half, freshman Janet Henkai, usually a defensive player, scored her first goal of the season. As Hagen continued shuffling players to try new positions, the Blazers began to lose their steam; Henkai's goal would be the last.

For the rest of the half, the Knights and Blazer dueled out an already decided game. When the game ended, Blair's JV field hockey girls could do nothing to keep the wide grins off their face. "We played well and dominated the game, but the next two coming games are going to be serious and we will need to focus," said Hagen after the victory.

For the captains, the game was more than just a win. "We really came together as a team at the end. We got to practice different formations in an 'in-game' situation," said co-captain Jenna Craver. Hagen reminded the team that the season was not yet over and there were many more games to play. To this captain Waldrop responded, "This was a good restarting point after losing to Poolesville, we are looking forward to more games like this."

The Blazers' next home game is Monday, Oct. 8 against Paint Branch at 5 p.m.