The bus stops, and the scrambling starts. Forty-eight students file out with one thing on their minds – money – and, of course, not getting lost amidst thousands of bargain hunters crowding the messy streets of New York City's wholesale district. Four and half hours later, the students will be back on the bus, their wallets a little lighter, and the negotiations will begin.

This group of students, from Blair's entrepreneurship academy, embarked on their third annual day trip to New York City on Nov. 8 with resource teacher Kevin Murley. The National Foundation for Teaching Entrepreneurship (NFTE) granted each student $50 in "seed capital," a foundation off which they can make money. "It's like planting a seed to start a business," Murley says. The goal of the trip was for each student to earn a profit by purchasing items in bulk and then reselling them to peers on the trip and back and at Blair. 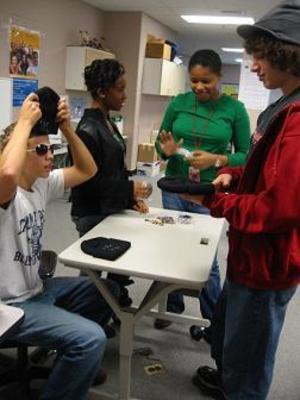 Navigating the streets of New York was a thrill for senior Imani Cupé. "I liked shopping and looking around," she says. "I learned how to buy a lot of products. I didn't even know there was a wholesale district."

Junior Saron Taye concurs. "I loved it," she recalls, still enthralled. Shopping around, she honed in on a sets of legwarmers and earrings. "I chose based on price and based on what people would buy."

As the clock struck three, the students returned to the bus and watched as, heading down the Jersey turnpike, it became a pawnshop. Jewelry, handbags, scarves, t-shirts, hats, gloves, electronics, accessories and prank pens undulated through the aisles as students put their sales skills to the test.

Murley gave each student a moment in the limelight to "say what we bought, how much we were selling it for and why they should buy it," says Cupé, who took full advantage of the opportunity. "I went up and told them I was customizing shirts. People started to ask what other things I would customize, like 'could you customize my bookbag?'" she says, crediting the biddings wars with widening her market.

Along those lines, Murley sees several benefits of the trip for Blair's aspiring entrepreneurs. "Students learn to present themselves professionally, learn to negotiate deals, learn to evaluate what customers really want and of course, they get hands on experience with money," he says.

Some students also used the trip as an opportunity to establish ties with prospective business contacts. They collected business cards to maintain a relationship with the supplier, in case their products turned out to be hot sellers, according to Murley.

Resale prices ranged from $3 for a keychain to $15 for a scarf to significantly more for a North Face jacket. One unfortunate investment was small containers of hand sanitizer. "Those didn't sell too well on the bus," Murley laments of his two unsuccessful students.

Cupé hasn't sold anything yet, but not for the same reason as the boys with the hand sanitizer. She invested in two-dozen plain-colored shirts to customize and sell at an event in December. She expects the t-shirts to not only earn her a profit, but to also ignite a new business.

For sophomore Helder Hernandez, the trip marked a different milestone. "I got to see New York. It was my first time," he says. But Hernandez didn't have much time to dwell on the hoards of people, traffic and tall buildings; he was too consumed with making the right ventures. "You have to be intelligent, you have to know how to play the business," he says.

Back at school, Blazers are still trying to dole out their merchandise. For the most part, Taye has depended on her friends to bolster her enterprise, and she admits to "guilt-tripping" as a main strategy. At the same time, she has learned the value of persuasion. "I pitch it them so they buy it," she says. Beyond her friends, she's taken her spiel to the rest of the school, selling during free time in class.

Hernandez purchased laser pointers, packs of gum and children's umbrellas, and has similarly been dispensing during class hours. The lasers have earned him the most dough so far, although Murley did purchase an umbrella.

Murley also came away with a new bracelet, scarf and set of I-pod speakers. But besides his new toys, Murley says his favorite aspect of the trip occurred once back at Blair. "Somebody came in yesterday saying 'I just made $120 selling my stuff. It's so cool!'" he says. "Then I see somebody really understands business. Then they might decide to spend less time on YouTube and more time actually doing something for their business."