After vaulting to number six in the Montgomery County football rankings, expectations were high for the Blair Blazers (2-0). But, the Blazers refused to let the pressure get to them. They pounded the BCC Barons (0-2) on Friday night by a score of 42-12, pummeling the Baron defense into the ground with 612 total yards of offense.

At first, BCC appeared as if they would be a tough challenge for Blair. The Barons received the opening kickoff and drove down to the Blazer 15 yard-line. The Blair defense was able to step up for a red zone stop, but BCC kicker Cyrus Nemazee converted a 32 yard field goal to give the Barons an early 3-0 lead.

However, the tides turned once the ball was in the hands of the Blazer offense. Deep in BCC territory, Blair got creative, running a trick play which saw senior fullback Anthony Aquino heave a pass into the end zone that was brought down by senior wide receiver Clifford Carter.

The Blair coaching staff ran the trick play to exploit flaws that they noticed in the BCC defensive scheme. "We saw on film that they left holes open and committed to the run,” head coach Andrew Fields said. 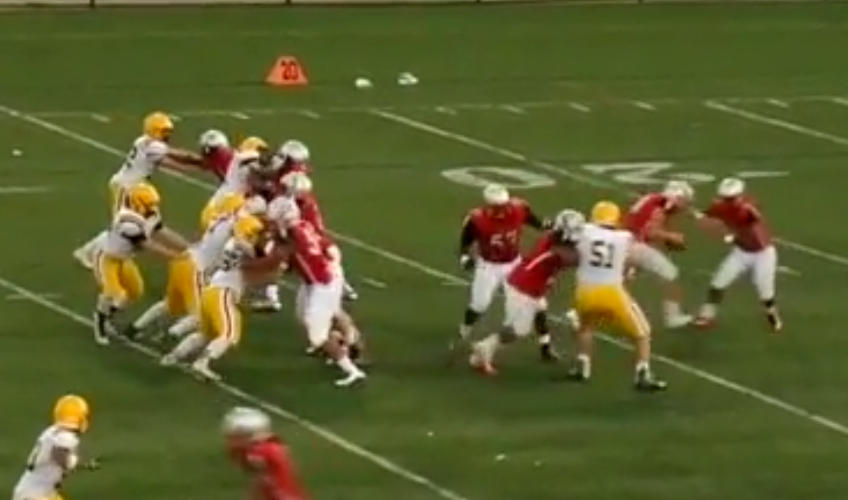 Photo: The Blazers used some trickery to defeat the Barons in week two.

Photo: The Blazers used some trickery to defeat the Barons in week two.

Momentum stayed on the Blazers' side throughout the first half. Senior running back Eric Zokouri followed his blockers downfield for a 39 yard rushing score as the first quarter winded down, with Blair ahead 14-3. BCC responded with another field goal, cutting the Blazer lead to one possession, but Blair struck back impressively with a 73 yard touchdown catch by Carter from senior quarterback Desmond Colby.

Still firing on all cylinders, the Blazers tacked on another touchdown before halftime, a connection between Colby and senior wide receiver Chris Butler. "The whole team was communicating well,” Zokouri said of the team's strong performance. Blair headed into the locker room with a commanding 28-6 advantage.

Despite their sizable halftime deficit, the Barons were not ready to give up just yet. Their defense finally halted Blair's offensive onslaught, holding the Blazers scoreless in the third quarter. BCC threw a touchdown pass to cut the Blazer lead to 28-12, but were unable to convert on a two-point conversion.

Blair finally pulled away for good in the fourth quarter. Zokouri powered his way into the end zone for an eight yard touchdown run, and senior wide receiver/linebacker Ponce DeLeon picked off an errant BCC throw to set up his own touchdown catch from Colby. Blair ran out the clock to finish off the game.

Temperatures during the game were brutal, reaching up to 92 degrees. But the Blazers overcame the heat in a gritty performance. "We've practiced in worse heat than that, so we're used to it,” Zokouri said.

Fields considered the team's win an improvement on their victory against Northwood last Friday. "No doubt, we are getting better by the week,” he said following the game.

In a clash of undefeated teams, the Blazers will travel to Germantown to battle the Northwest Jaguars (2-0) next Friday at 7:00 p.m.