Blazers participate in Day of Silence

Students hold discussion in the breaking of silence event

Today over 350 students participated in the nationwide Day of Silence by not speaking throughout the day in support of gay rights, according to history teacher Mary Thornton, the sponsor of the Gay Straight Alliance (GSA) Club.

The Gay, Lesbian and Straight Education Network (GLSEN) started the Day of Silence 10 years ago. Blazers who participated, whether silently or not, were part of 500,000 students nationwide who were expected by GLSEN to participate in the event to help raise awareness of discrimination against gays, lesbians, bisexuals and transsexuals. 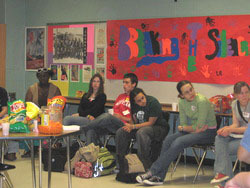 Photo: Blazers participate in the Breaking the Silence discussion held at 2:10 p.m. following the Day of Silence event to protest discrimination of homosexuals.

Photo: Blazers participate in the Breaking the Silence discussion held at 2:10 p.m. following the Day of Silence event to protest discrimination of homosexuals.

In the morning, students were positioned at the Colesville and University Blvd. entrances to handout stickers and leaflets and ask people to sign petitions against homosexual discrimination. Students who wished to express their support could choose to remain silent throughout the day. The silence is a symbol of the silence of homosexuals who are afraid to be open about their sexuality because of the hatred and lack of understanding by some of their peers, according to senior Jocelyn Dowling, GSA's co-president.

Throughout the day, some students who kept quiet found other ways of communicating by writing their thoughts out in notebooks while others chose to cease communication for the entire school day. Many participants noticed that a majority of their teachers were supportive of their silence and some even participated in their own ways.

Some students did not participate in the event and were skeptical of the purpose of the silence. Junior Avi Silber, who has participated in the event each year at Blair, said that the silence attracts people's attention and causes them to ask questions. On this day, people notice the support of homosexual rights. "For at least [this] day we've made this issue a school-wide issue," said junior Avi Edelman, GSA's other co-president. 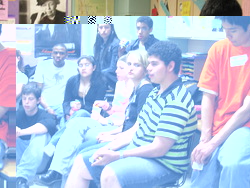 Photo: Students discuss the importance of the Day of Silence in showing the school, community and nation the struggles of homosexuals in attaining respect and understanding.

Photo: Students discuss the importance of the Day of Silence in showing the school, community and nation the struggles of homosexuals in attaining respect and understanding.

Participants gathered in room 271 from 2:10 to 4:15 p.m. for a "breaking the silence" discussion about the day's experiences. Students discussed the support of teachers, the impact of interpretations of religions on views of homosexuals and the importance of the Day of Silence. Junior Colin Forhan expressed his belief in the importance of the day because of how it teaches not to discriminate. "A lot of people don't realize the sort of feelings they're conjuring in others [by using "gay" as an insult]. A lot of people are blind to what they're contributing to," Forhan said.

Various Blazers discussed personal experiences of discrimination because of their sexual orientation and the difficulty it has been opening up to their families or keeping their sexuality a secret. Others explained their struggles as they try to be understood and not seen differently in the eyes of their peers, teachers and families. All agreed that the Day of Silence is a way to empower them and feel as though they are supported.

"There's days where I feel like I'm all on my own. But it's days like these that I finally feel like I have support," said one student.

While students were the main force of participation in today's event, teachers and administrators also showed their support. Some teachers tried to speak minimally during class while others wore the stickers. Principal Phillip Gainous wore a sticker and both administrators Patricia Hurley and Linda Wanner stopped by the room during the discussions and expressed their appreciation for the student's participation in the event. Wanner remained to discuss various points on the issue of homosexual discrimination.

"It's comforting to know we have the support of the principal and all the administrators," Thornton said.