RMSC ends up fifth in women's, third in men's competition

Two Blair students, senior Eric Ruggieri and junior Niklas Hammond, competed in the National Club Swimming Association (NCSA) Junior Nationals in Orlando, Florida last month. Both are members of the Rockville-Montgomery Swim Club (RMSC), one of almost 90 clubs and leagues that took part in the weeklong, countrywide meet. RMSC placed third overall, with a combined men and women's score of 586. 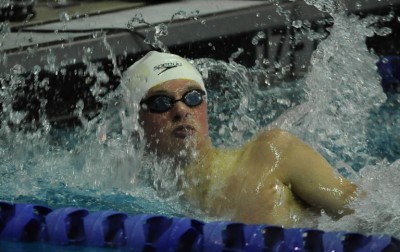 Photo: Jack Conger, a sophomore at Good Counsel, was one of the leading male swimmers at Junior Nationals.

Photo: Jack Conger, a sophomore at Good Counsel, was one of the leading male swimmers at Junior Nationals. Photo courtesy of Washington Post.

During preliminaries, Ruggieri dropped a second from his seeded time of 59.49 on the 100-Yard Breast and was made a first alternate for that event. He swam the breaststroke portion of the 400-Yard Medley Relay, in which RMSC's ranked 38th, and made the C Finals for the 200-Yard Breast. He landed in 24th place, qualifying for the Speedo Junior National Championships in Stanford, California this coming summer.

"I'm going to work on my long-course swimming for the Stanford meet and do some speed work to improve my 100 [Breast]," Ruggieri said. "I'm also going to change up my taper...because I was a little off my peak rest [at Nationals]."

Ruggieri, who plans to swim at Emory University next fall, has been on the National Training Group level for nearly five years and has attended Junior Nationals twice before. He said Junior Nationals was a successful meet for RMSC and was proud of his individual performance. "I qualified this year because I let go of all my worries about not making the cut and just swam my race, which helped me stay relaxed," he said.

Notable RMSC performances came from Jack Conger, who won the men's 100 and 200-Yard Back, and Sarah Haase, who placed second in the women's 200-Yard IM and the 50 and 100-Yard Breast. Additionally, Aquajet Swim Team's Rachel Bootsma's 100-Yard Backstroke time was the third fastest ever competed in the women's event.

Ruggieri thought the meet was a good opportunity to see a wider set of competition, and said there was an atmosphere of teamwork and good sportsmanship throughout the week. "Swimming at finals was a whole other experience. I had the entire team cheering for me and supporting me," he said. "It was an amazing feeling."