Three Blair teams placed at the Maryland Regional Science Bowl in early January. Team A, made up of seniors Andrew Das Sarma, captain, Sandra Yan and Alex Briese as well as sophomores Viju Ilangovan and Sam Zbarsky, won regionally and placed second at the National Science Bowl in D.C., which ran from April 28 to May 2. 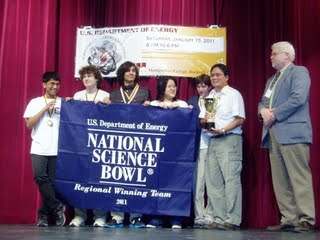 Team A competed against 69 teams from all over the nation - from Hawaii to Alaska, according to Das Sarma. First place went to Mira Loma High School from Sacramento, California.

On the first day, team A played against eight other teams in their division and won every match, earning a spot in the Double Elimination (DE) tournament. "We [lost] our first DE game in the evening," Das Sarma said. "We then proceeded to win every other match that day, bringing our record to 13-1 and securing a spot in the top three."

The following day, semifinals and finals took place in the National Building Museum. After winning semifinals, team A had a victory against the then undefeated Mira Loma team, who won previously in 2008. Though team A won the round, both teams had one loss at that point. A final game broke the tie and determined the winner, Mira Loma.

To prepare for the competition, Blazers had to study on their own as well as practice answering questions as a team. The biggest challenges are having both breadth and depth in scientific knowledge as well as good critical thinking and dexterity. "A lot of it depends on speed, knowing stuff, and predicting where the question is headed," Yan said.

The team practiced as a group throughout the year, sometimes meeting weekly. "There are roughly 2,500 high school science bowl teams across the country which participate in this competition," Das Sarma said. "There's a rather high standard for how much knowledge and speed a successful team must have."

According to Yan, Magnet teacher Tran Pham has been the science bowl coach for over 15 years. Though team collaboration was the most important step in preparing for Nationals, Phan offered knowledge and made the experience more enjoyable. "He also gave our team a looseness and sense of humor that distinguished us from some other robotic, unhappy-looking teams," Das Sarma said.

Blair has also previously won first place at Nationals, most recently in 1999.

For more information and to stream the competition live click here.