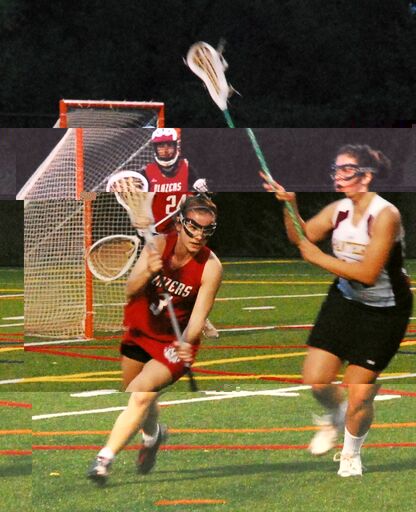 The girls' lacrosse team (5 - 0) remained undefeated after a win against Paint Branch Friday night. Although the Blazers were not completely satisfied with how they positioned themselves on the field, the team is excited to continue the rest of the season as a threat to other teams in the county.

Although the score was close throughout the entire game, the Blazers always remained on top. One exciting moment occurred just before halftime, when senior captain Molly Branson scored two goals in the final minutes of the half, resulting in a score of 7 - 3.

In the halftime huddle, coach Mike Horne emphasized the importance of spreading out on the field, senior captain Nellie Garlow explained. "We were doing short passes that were always getting intercepted," she said. Although Horne was frustrated that his team continued to clump on the field, he was impressed with other aspects of the team's performance. "Our transition game, when we stretched the field, was pretty," he said.

Horne added that he was pleased with the play of certain individuals, specifically the stellar performances of junior Ava Wallace and senior goalie Annie Buckley. Horne also mentioned junior Lyla Shapiro's contributions, which included four goals, two of which were back to back in the last two minutes of the game. Unfortunately, one goal was not counted because a teammate was called by the referee for being off sides. Horne recognized Shapiro's fast plays as key to her success. "She's got good speed," he said. Top scorers of the night also included Branson and juniors Tessa Mork, each with three goals. 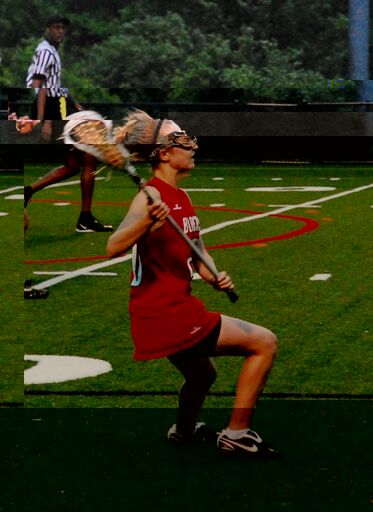 Photo: Senior Emily Hedrick maneuvers her way around her opponents.

Photo: Senior Emily Hedrick maneuvers her way around her opponents.

In order to prepare for Paint Branch, Horne explained that the Blazers had to adjust to the Panthers' slightly stronger offense. "They're a strong aggressive team," he said. "Their style of play is a little different than anything else we've seen this season." Garlow added that Blair strategized to stop Paint Branch's most threatening players. "We knew who their two strongest players were and then focused on shutting them down," she said.

With an undefeated record for her team thus far, Garlow expressed pride and excitement for the rest of the season. "The county now has to recognize us," she said. She attributed Blair's success to the positive qualities of the team as a whole, not any individual athletes. "During this season, I've learned that a strong team will get wins, not just a strong player," she said.

In order to get ready for next week's game against Walter Johnson, the Blazers will work on the passes they had trouble executing during this particular game. "We're going to focus on wide passes in the midfield," Garlow said. "We're also going to work on endurance this weekend."

Horne added that the team will need to continue to focus on each game as it occurs in order to remain successful for the remainder of the season. "We take one game at a time," he said. "We're going to try to simulate what we think [Walter Johnson] is going to throw at us."

The girls' lacrosse team plays their next home game on April 26 against Northwest at 5:00 p.m.