Blazers reflect on the D.C. Sniper attacks with the premiere of "Blue Caprice"

Editors Note: Silver Chips Online offers our deepest condolences to the victims and families of the recent Navy Yard shootings in the District.

In the fall of 2002, the current seniors at Blair were most likely in first grade, the juniors in kindergarten, the sophomores in Pre-K and the freshman not even attending school yet. Many of our students attended elementary schools in this area, where just seven miles away from Blair, the first shot of the D.C. sniper attacks was fired.

During this time, the Beltway or D.C. Snipers killed 10 people and critically wounded three. These random killings occurred in just three terror filled weeks only one year after 9/11, adding to the mounting fear people had of their surroundings. The two killers, John Allen Muhammad and Lee Boyd Malvo, targeted victims in Montgomery and Prince George's County as well as areas of Virginia and D.C.

Montgomery County Schools went into lockdown during the weeks, with no recess or outdoor gym classes which is the biggest recollection that most Blair students have from this time. "I was six but I remember a lot," Senior Henock Yilma said, "I remember recess inside and that we never went outside day after day and it got boring but I didn't have a large understanding of what was actually happening." Junior Sammy Wichansky has similar memories, "I remember having to have recess inside but the school didn't really explain why," she said.
"Blue Caprice" directed by Alexandre Moors was released on Sept. 13 and details the attacks in a unique light. The R rated feature film takes an approach that's "elliptical and allusive" according to The films name comes from the car that Muhammad and Malvo drove during the shootings. The blue caprice had been checked by radio patrol cars many times near shooting locations but was never stopped because it was infamously thought that there was only one sniper driving a white van.

The general public believes that the motive for the killings was the anger Muhammad had over his failed marriage. His ex-wife and children had relocated to the D.C. Metropolitan area which then became the target of his attacks. Many of the victims were killed while doing every day activities such filling their cars with gas. The snipers were caught on Oct. 24, and Muhammad was sentenced to death by lethal injection while Malvo, a minor, received six consecutive life sentences without the possibility of parole. Despite the horrific crimes that Malvo assisted in committing, many feel sympathetic towards him because of his age, 17, at the time of the killings. "It's extremely sad because he [Muhammad] brain washed such a young boy," Maureen Diodati, a former Blair English teacher said. 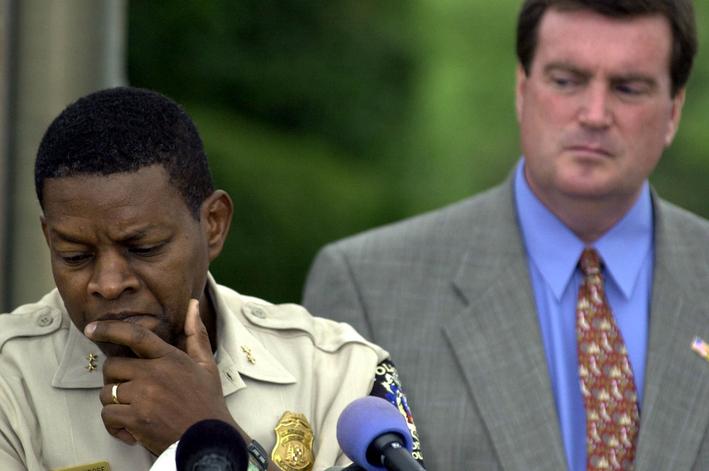 Photo: Montgomery County Police Chief during the time of the attacks, Charles Moose.

"Blue Caprice" is not the first film centered on the D.C. Snipers, "23 Days of Fear" starring Bobby Hosea was released just a year after the attacks on USA Network. This version of the story focuses more on the Montgomery County Police Department chief at the time, Charles Moose, and the image he portrayed during the attacks.

Although the film has received mixed reviews so far, it appears to show viewers a more psychological look at the snipers, something many in this area would be interested in. The end of the traumatic story is already known, Muhammad is now deceased, after his 2009 execution and Malvo is currently serving his life sentence. Since the end is already clear, maybe "Blue Caprice" will help people and especially those in the area terrorized, fully understand what was happening in the heads of Muhammad and Malvo. The release of this film might allow current and former Blair students to reflect on a time period that for many, especially the underclassmen, is barely a memory.