Blazers shut down by Sherwood

Fans and players alike were holding their breath early in the second half of the JV girls' soccer game when forward Susan Branson took a shot on the Sherwood goal. The ball sped closer and closer to the net only to come into contact with the utmost tip of the Sherwood goalie's fingertips. Deflected by the goalie, the ball then glanced off the pole and back onto the field. 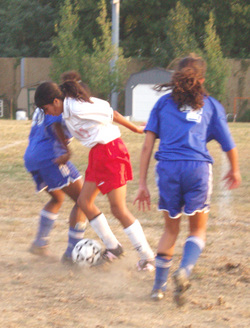 The second half of the game was particularly intense, with Blair striving to come back from an early goal by Sherwood. "No goalie could have saved that shot. It was a lucky shot. It bounced off the crossbar and went in," said sophomore midfielder Ixchel Montenegro. "It was a fluke goal," added coach Summer Roark.

The Blazers did not manage to even the score with Sherwood, though the girls did make several valiant attempts at making goals. The Blazers took a multitude of shots in the second half, some of which would have been effortless goals if not for Sherwood's exceptional goalie.

Sherwood demonstrated superior footwork but lacked team chemistry and fluidity. The inability of the Sherwood players to make accurate passes allowed Blair to dominate possession for most of the game.

While the Blazers were discouraged to have played so much better than they did against Churchill and not win, the team is optimistic about the rest of the season. "We're getting better and better. We still have eight games," said Roark.