The Blair boys won their first official swim meet this season after pounding Magruder 124-46. Although the girls lost 70-101, individual girl swimmers improved their times from the non-divisional meet last week. Additionally, the freshmen girls proved their mettle in a number of races, winning some of the girls' crucial points. These results bring the boys' and girls' records to 1-0, and 0-1, respectively. 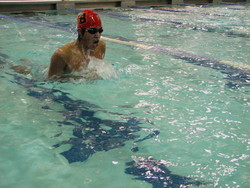 Swimmers from both sides were missing because of an invitational meet that spanned the weekend. While Blair only lost two members, key swimmers senior David Vuong and freshman Jeffrey Lin, the Magruder team suffered without their best, according to Magruder coach Amy Weiss.

With the unusual absence of some of their best, Magruder struggled throughout the meet against the Blair boys, who took all individual and relay first places throughout the event. Their stellar performance was no surprise, as the boys' continuously contributed points by sweeping past Magruder swimmers. Junior captain Yang Yang placed first in the 200 IM with a time of 2:07.44, over 7 seconds faster than the second place Magruder student.

For the girls, the meet was more competitive, which encouraged Blazers to strive for the best against a similarly matched team. In the 200 Medley Relay, the girls placed first after out touching the Magruder team by .01 seconds. The relay team, which included sophomore Melanie Snail, freshman Laura Sirbu, junior captain Francesca Blume and freshman Jenna Williams, finished with a time of 2:05.11. Snail, and senior captain Sally Chang, won first and second in the 50 Free, out touching Magruder swimmers with times of 26.92 and 27.53.

The diving event took place midway through the meet. Magruder senior Jaime Thayer placed first in boys' diving, although Blair junior Michael Willems was less than 8 points away at 87.25. In the girls' diving event, sophomore Caitlin Ludington and senior Nicole Poor placed second and third, after Magruder sophomore Brittany Powell stole the show with a strong score of 144.90. Ludington and Poor received 86.85, and 81.35, respectively. Last week, Poor captured first with a score of 129.9.

Of the many impressive displays at the meet, junior captain Eddie Qian's (Tang) performance was the most memorable. Despite suffering a knee injury half way through the race, he led the sweep of the individual 100 Breast races with a time of 1:06.17. Although he had to be helped out of the pool he later anchored the boys' 400 Free Relay, leading them to a first place finish. Senior captain Robert Feasley, junior captain Tim Peng, senior David Goode and Qian's cumulative time was 3:41.79. The girls' relay teams placed second and third in the respective event. 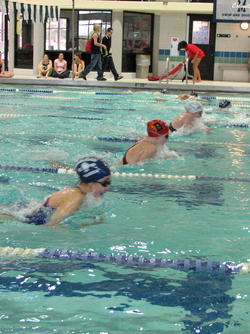 For Weiss, the swimmers missing from Magruder's team made the competition much harder, which showed in the final results of the meet. "There were some really good swims we didn't get to see, because our boys weren't here," she said.

Feasley agreed, saying, "The meet should have been a lot closer...[there wasn't much] competition for the guys." Last year, the boys beat Magruder 93-78.

Although both sides agreed that the results of Saturday's meet balanced on the boys' performances, the girls' swims should not be overlooked. While the Blazer girls did not capture a win in Saturday's meet, their progress marked the beginnings of a strong season. Blume believes the same, "We have some good freshmen who are really putting through for us," she said.

The Blazers' next meet will be at Montgomery College in Takoma Park against Damascus at 1 p.m.