The Lady Blazers came away with a narrow victory against Bethesda Chevy Chase High School with a score of 27-28 on Tuesday, but the boys suffered a whopping defeat of 15-48. Despite the loss, most of the team set personal records on the flat and fast course. 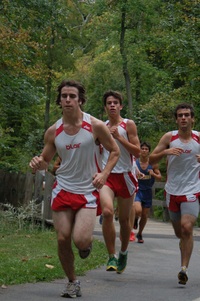 The second consecutive win was a proud moment for the girls. "Winning felt really good," said junior Elaine Chung. Nearly all of the team's runners also garnered a number of individual records because of the flat course.

Although they did not have to battle any hills, the boys faced fierce competitors in the Barons. "Their team had a really good strategy and they were the most organized team I've ever seen," said junior co-captain Frank Wen. "They let us pull ahead of them and then they pulled in front of us and we had trouble getting around them."

B-CC claimed the first 5 places in the race. The best Blair finish was by junior Rutvij Pandya, who took sixth place.

"The boys ran some fast times, but they're not experienced on a narrow course and it's not their home course," said coach James Demma of the race. "The top five runners really boxed out Rutvij in the narrow portion of the course, so he couldn't pass them. But as unfortunate as that may be, they are allowed to do that."

The course itself was a challenge for Blazers who were inexperienced with its layout. "It was really fast and completely flat, with not one hill and no elevation change," said senior Michael Willems, who ran this course last year.