Blair swim comes out on top in close contest

The Blair swim and dive team remains undefeated after soundly pounding the Blake Bengals 197-140. The yet undefeated boys' team reigned dominant once again, winning 109-62, and the girls also garnered a win with a score of 88-78, bringing their record to 2-1.

The meet began in favor of the Blazers with solid wins in the diving events. The Blair boys took first and third, with seniors Nick Reineke and Malik Davis scoring 87.65 and 79.35 respectively. Girls' diving was no contest since the Bengals had no female divers, giving juniors Abigail Cember and co-captain Caitlin Ludington first and second with 78.45 and 77.75 respectively. 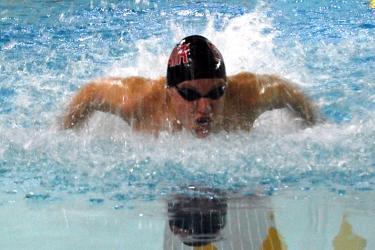 Photo: Freshman Eric Ruggieri concentrates on the race against Blake in the boys 100m butterfly.

Photo: Freshman Eric Ruggieri concentrates on the race against Blake in the boys 100m butterfly.  Photo courtesy of Julia Seiger.

The boys opened the meet strong with first and third finishes in the 200-yard Medley. The team of seniors Sam Bullard-Sisken and co-captains Tim Peng, Eddie Qian and Christoff Visscher finished in 1:44.69, slipping by Blake by a mere .12 seconds. The girls also took first and third, with the first place team of junior Melanie Snail, sophomore Allison Arai, senior co-captain Francesca Blume and freshman Laura McGehee placing in 2:00.68, a solid two seconds ahead of Blake's second place team.

The boys continued their dominance, going on to sweep the 200 Freestyle with junior Andrew McGehee, freshman Dennis Li and sophomore Matthew Kannan stealing first, second and third respectively. The girls also placed with Snail taking second in the girls' 200 Free.

Unlike other meets, this contest sported a number of close finishes with Qian taking first in the 50-yard Free, a slight .17 seconds ahead of Blake senior Alex Kim's second place. Visscher took third place with 24.03 seconds, a mere .37 seconds behind Kim.

The girls snatched a number of first place wins, including Blume in the 100-yard Butterfly at 1:06.84 and Laura McGehee in the 500-yard Free at 5:43.46. Sophomore Jenna Williams and senior Elissa Fischel took first and second respectively in the 50 Free and Snail stole second in the 100 Free with 57.91, only .44 seconds behind first place Blake senior Emily Reynolds. 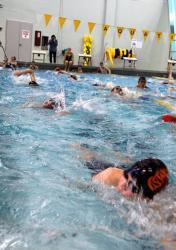 Photo: Blair warms up, sharing lanes before the swim meet against the Blake Bengals.

Photo: Blair warms up, sharing lanes before the swim meet against the Blake Bengals. Photo courtesy of Julia Seiger.

The boys faltered briefly in the 100 Fly, losing first and second to Blake swimmers. Bullard-Sisken, sophomore Nate Hukill and freshman Eric Ruggieri claimed third, fourth and fifth respectively. But the boys quickly shook it off and won first in every following event except the 100 Breast where Qian took second with 1:03.77, just .23 seconds behind Blake junior Matt Stevens.

The boys closed the meet with strong first and second finishes in the 400-yard Free Relay, with the first place team of sophomore Jeffrey Lin, Peng, junior Ben Shih and Andrew McGehee blowing away all competition, finishing 10 seconds ahead of the second place team. The girls also finished fairly strong, taking second and third in the same race.

Junior co-captain Melissa Mergner was impressed and pleased with the outcome of the meet. "It was pretty awesome," she said. "We definitely won, hands down."

Coach David Swaney was also very satisfied with the event. "It's good when both the boys and girls win, especially since Blake has really good swimmers. I'm really pleased with the final outcome," he said.

Blair's next meet will be held Saturday, Jan. 19 at the Montgomery Aquatic Center against Magruder at 9:15 a.m.