Slow start and sloppy finish lead to loss against Magruder

Blair varsity football stayed winless after a loss on Friday at home to Magruder, 35-12. Blair (0-5) climbed back to within one point after the Colonels took an early 13-0 lead, but was unable to overcome five turnovers.

It didn't take long for the Colonels (2-3) to get on the scoreboard. Despite a deep opening Blazer kickoff, Magruder made all the blocks necessary for long touchdown return. Just fifteen seconds in, Blair found themselves down 7-0.

Blair's own special teams return unit was not nearly as proficient. On the ensuing kickoff, a Blazer ran up the center and reached the Blair 25-yard line before fumbling and returning the ball back to the Colonels. From there, Magruder only needed two plays to reach the end-zone and extend their lead to 13-0. One minute and seven seconds had elapsed. 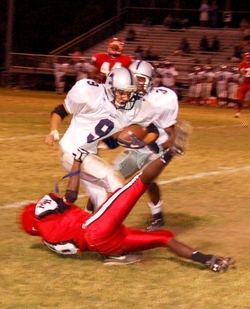 But the Blazers regrouped. "Everyone played hard," junior linebacker and captain Andrew Holmes said. "No one gave up, and that's all you can really ask for."

Blair's offense finally touched the field after a great kickoff return to the Blazer 43-yard line. Going to what has worked this season, Blair started with the running game. A handoff to junior running back Keith Ayensu moved the ball 15 yards and into Magruder territory. Jonathan Haughton, another junior running back, then moved the chains 20 more yards. Magruder evaded the Blair threat, however, picking off sophomore quarterback Alex Egber on a ball bound for the end-zone.

The Blazer defense lost none of the energy their offensive counterparts had just generated. Continuing to stuff the run, Blair forced a Magruder punt. Egber and the offense returned to the field.

With seven minutes left in the quarter, Blair put together their best drive of the year so far. To start things off, Ayensu pushed across midfield on a 15-yard run. Then Egber hit senior wide receiver Enuma Nzesi to move ahead another 15 yards. The rest was all Jonathan Haughton. A 22-yard dash by Haughton brought the Blazers to the Magruder 12-yard line. Ignoring his last trip deep inside Colonel territory, Egber dropped back calmly with the ball. He then caught the open Haughton near the left sideline. Still ten yards from the end-zone, Haughton faked outside then cut toward the center through a hole and in for the touchdown, cutting the deficit to 13-6. The touchdown also ended Blair's scoring drought, which had lasted 11 quarters.

The Blazer defense built upon the momentum garnered by the offense. On their next possession, Magruder's offensive line slowed up, and Blair burst through for the sack. Unable to make up the lost yardage, the Colonels punted.

At the start of the second quarter, Blair returned to the ground game. Ayensu carried three times as the Blazers marched 36 yards upfield. Inside the Magruder red-zone, Egber completed a seven-yard pass to Haughton on third down and long. Ayensu ran on the resulting fourth down, which he took past the first down marker into the end-zone. The extra point was no good, leaving the Blair down one point, 13-12.

But Magruder didn't allow the Blair fans to celebrate for long. Less than two minutes later, the Colonels scored with their speedy running back, increasing the gap to 19-12.

The Blazers had the remnants of a drive as time in the first half winded down, but another Egber interception sealed the second quarter.

Despite a strong showing in the first half, Blair's offense lost their energy in the second. Mishandled snaps and a Magruder defense that used halftime to tailor changes to guard the run stopped the Blazers in their tracks.

Fortunately the red-and-white defense lost no vigor, continuing to smash into the Colonel's offensive line and forcing Magruder to convert long third downs. The Colonel's found no success until the final moments of the third quarter, when a touchdown on the ground increased their lead to 26-12.

Discouraged by the score and the time remaining, Blair went to the air. But Blazer receivers were unable to hold on to accurate throws from Egber. On fourth down and their own 35-yard line, Blair resorted to trickery. The fake punt was unsuccessful, handing the ball to the Colonels in a dangerous position.

But the Blazer defense anchored by Holmes gave Magruder no room to operate and forced a punt. Yet instead of allowing the ball into the end-zone for a touchback, Blair's special teams made their third mistake of the game, catching it on the two-yard line. On the following play, a bobbled snap turned into a safety and a 28-12 Magruder lead.

Egber continued to go to the air. Despite occasional success, Blair could not compile enough yardage on a single drive to threaten for another score. A late Egber interception was returned for a touchdown, sealing the game at 35-12.

The loss was not all bad for the Blazers. Though the scoreboard showed 35 points for Magruder, Blair's defense only gave up only 19 of them. And even then, one of the Colonels' scoring drives began on the Blair 25-yard line.

"I was proud," head coach Jeffery Seals said. "They fought the whole game. We missed some important tackles, but they kept trying."

Blair football's next game is at Sherwood on Oct. 12.