Varsity field hockey starts off the season with success

Blair's varsity field hockey team began the season with a victory today, earning a well–deserved 3-2 win over Walter Johnson. A combination of aggressive offense, effective communication and teamwork gave the Blazers the edge during the game.

The Blazers were in control from the onset of the game, receiving a penalty corner and an opportunity to score within the first minute. Excellent passing skills and quick maneuvers allowed them to keep possession of the ball for the majority of the first half. 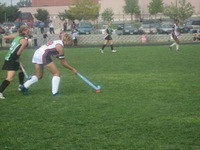 The Blazers took initiative and put pressure on their opponents early with a continuous wave of corners, but failed to capitalize on many of these scoring opportunities. Captain Eve Kenney came close but was ruled outside of the goalie's circle. Blair took the lead later in the first half with a goal by junior Julia Stratton scored off an assist by Kenney.

Walter Johnson finally breached Blazer territory twenty minutes into the game, but the Blair's impenetrable defense prevented any damage. After several solid clears and passes, senior Iliya Smithka added another goal to the Blazer count with three minutes remaining, giving the Blazers a solid 2-0 lead to end the half.

Although Blair began the second half with similar intensity as the first, Walter Johnson was able to take control of the ball early on. Several corners led to two assaults from the Wildcats within seven minutes of the second half which were briefly neutralized by a Blazer defensive counter, but the Wildcats' speed afforded them their first goal ten minutes into the second half.

Undaunted, the Blazers continued to control the field with a series of long passes, a quick transition up-field and a strong attack. The offense retaliated four minutes later when Smithka converted another corner into a goal, putting the Blazers back up by two.

The Blazers' dominance was also felt on defense a few minutes later when the Wildcats threatened to score again off of a corner. Blair's defense quickly cleared the ball, letting the offense control the pace of the game. Effective ball movement allowed the Blazers to skillfully maneuver past the Wildcat defense and the drive ended in a near score, missing the goal by a mere few inches.

The last minutes of the game were a tug-of war for possession. Desperate to score, Walter Johnson found the back of the net once more with forty seconds left, but it was too little too late, leaving the final score at 3-2, Blazers.

Coach Brook Franceschini attributed the team's win to great teamwork and communication. "The team moved the ball up and down the field effectively," she said. "We were passing well, and in the end we tired out Walter Johnson."

Captain Claire Onley was pleased with the team's improvement. "We did really well compared to last season," she said. "We got up faster and made it harder for [the Wildcats] to defend their goal."

Captain Sumih Chi agreed and noted the team's endurance throughout the match. "All the skills we perfected in practice all showed up today," she said. "I'm really proud of the team for persevering through the heat and showing our intensity throughout the game."

The varsity field hockey team plays its next home game on Thursday, Sept. 20 against Richard Montgomery at 3:30 p.m.