Blazers swept up by Falcons

After two victorious and dominating games against Richard Montgomery and Rockville, the varsity field hockey team returned to their wet and muddy home field to play against the Poolesville Falcons. Plagued by horrible weather conditions and unable to match the Falcons in aggression or endurance, the Blazers (3-2-0) fell to Poolesville, 6-0. 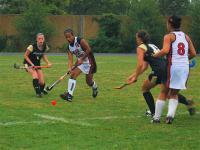 Poolesville started off the game dominantly, with quick steals and forceful drives down the field. Capitalizing on their agility and speed, the Falcons scored a goal early in the first half. Despite hard drives by sophomore defender Blake Morgan-Gambler and consistent jabs by junior defender Laura Li, the Blazers could not keep up with the hard-hitting Falcons.

Late in the first half, rain and fatigue began to plague the Blazers, causing the team to make simple mistakes, drop their sticks and slip on the field. Head coach Brook Franceschini stood on the sidelines reminding her players to keep their "sticks down," as the Blazers struggled to keep up with the Falcons. The Falcons remained dominant the rest of the first half, scoring two more goals on senior co-captain goalie Katelyn Luker.

Despite the rain, a fire had ignited within the varsity team during the second half. Senior co-captain Julia Stratton and junior center midfielder Lily Alexander carried the team down the field, forcing Poolesville to play defensively. "Team chemistry has definitely gotten better," Stratton said.

The second half started out positively for the Blazers as they were able to get consecutive corners. The Blazer offense and defense was strong, supported with sharp drives by sophomore center defender Janet Henkai and swift hits by junior left forward Nellie Garlow.

Photo: Senior Neva Bowers engages in a grueling match for the ball.

However, the Blazers were not able to hold onto the intensity that drove them early in the second half, allowing the Falcons to score two more goals. "Blair field hockey this year has been having a big problem. We're intense for like five minutes and then we're tired and off-point. It's something we're really working on," said Garlow.

Unfortunately, the Blazers were not able come back against the highly skilled Poolesville offense and the Falcons scored one more goal before the end of the game, bringing the score to 6-0. "We played against a really good team," said Stratton.

After the game, Franceschini expressed understanding as well as disappointment in losing by calling a half hour talk in the team room rather than staying to watch the junior varsity field hockey team play. The rigorous game schedule attributed to the frustrating loss, according to Luker. "We haven't been able to reflect on any of our games because there have been so many," Luker said.

In the girls' locker room, the team sat lined up against the walls, obviously let down from their loss. Senior co-captains Luker and Stratton were quick to lighten spirits however, cracking jokes and advising their team to "let it go."

"As soon as it hits midnight, this game is over. We are going to let it go and refocus for the next game," Luker said.

The Blazers' next home game is Oct. 1 against Bethesda Chevy-Chase at 3:30.