When the final whistle was blown last night at Blazer Stadium, the Blair boys' varsity soccer team- along with a throng of avid supporters- erupted in celebration, waving jerseys, hugging teammates and chanting songs of victory. The Blazers (3-0) had just notched one of the biggest victories in recent Blair soccer history, knocking off perennial soccer power Churchill 2-1 in thrilling fashion. 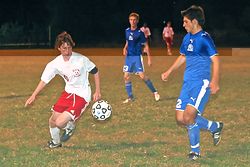 Photo: Mikey Worden moves past a Churchill defender during Blair's 2-1 upset over the Bulldogs.

Photo: Mikey Worden moves past a Churchill defender during Blair's 2-1 upset over the Bulldogs.

Blair head coach Adrian Baez attributed the victory to the intensity shown by the Blazers' back four, seniors Alec MacLean, Alex Assare-Wassow and Ethan Kuhnhenn and junior Noel Aguirre. "The key to winning the game was our defense," said Baez. "They really covered for each other back there and supported one another."

The Churchill Bulldogs (4-1-1) came into last night's game riding a six-game winning streak during which they outscored opponents 18-2 and were ranked #4 in the D.C. metro area by The Washington Post last Thursday and #8 in Region IV by the National Soccer Coaches Association of America. And earlier in the year, the Bulldogs had worked DeMatha Catholic, the #1 nationally ranked team at the time, to a scoreless tie.

All these accomplishments and accolades meant nothing to the Blazers, though, who came out with more confidence and sharper feet. From the opening kickoff, the Blazers seemed to be on a mission to muscle the Bulldogs and fight for every ball. Through the first forty minutes of play, neither side could break the scoreless deadlock.

The Blazers lit up the scoreboard first, when in the 57th minute senior co-captain Josh Zipin weaved his way through several Churchill defenders, taking the ball from the left wing to the central third of the pitch. As Zipin looked to slide a through ball to a cutting teammate, he was shoved off the ball, setting up a free kick for Blair. Free kick specialist and sophomore wonder-kid Mikey Funes was summoned to take the kick, which was lined up roughly ten yards shy of the box. Funes fired a shot off his left foot, but the Bulldogs' wall of defenders was there to reroute its course. As the ball hung in the air, a Churchill defender charged toward it, only to misjudge the spin and have the ball soar over his head. Senior forward Matias Salinas was there to settle it and send a rocket over the goalie's head, scoring his team-leading third goal of the season and putting the Blazers up 1-0. 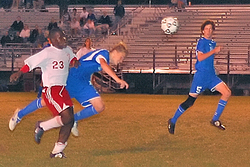 Photo: Senior Yendoukoa Lamboni fights for the ball late in the second half against Churchill. The Monday night game ended with a celebrated victory for Blair.

Photo: Senior Yendoukoa Lamboni fights for the ball late in the second half against Churchill. The Monday night game ended with a celebrated victory for Blair.

With Churchill reeling, the Blazers went on the attack, pressuring the Bulldog defense into giving up two more free kicks within an intense five-minute span. Funes bent one ball into the goalmouth that nearly gave the Blazers a 2-0 lead, but instead banged off the right goalpost as the crowd- one of the biggest crowds ever for a regular season soccer game- gave a collective moan of angst.

In the 65th minute, Funes was again on the attack when a Churchill defender tripped him, sending him to the turf. Despite screams from the stands and objections from Blazers on the field, the referee let play continue. But as Funes dusted his shoulders off, MacLean regained possession of the ball for Blair, dribbling to the middle of the field and playing a beautiful long ball ahead to senior striker Yendoukah Lamboni. After bobbling the pass and sending the ball trickling into the box, Lamboni muscled his way past a surprised Bulldogs defender. Just as Churchill's goalie decided to make a break for the ball and a spectacular save, Lamboni poked the pelota into the right side of the net for his first goal of the season, giving the Blazers a 2-0 lead late in the second half. "I made a beautiful run," said the outspoken and unabashed senior goal-scorer. "I fought out there, just kept fighting." 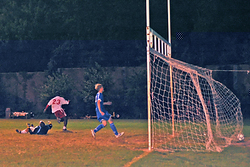 Photo: Yendoukoa Lamboni scores late in the game to put Blair ahead 2-0 against the nationally ranked Churchill Bulldogs.

Photo: Yendoukoa Lamboni scores late in the game to put Blair ahead 2-0 against the nationally ranked Churchill Bulldogs.

With Blair looking to preserve a 2-goal lead, Churchill mounted all that it could for a comeback. Churchill was awarded a corner kick after a saving slide tackle by Kuhnhenn, and they made the most of it. After a header by a Churchill attacker and a weak clear by the Blair defense, another Bulldog was freed up at the top of the box for a shot. His blast weaved through the traffic that existed after the corner, and senior goalie Matt McClain never got a good look at the shot. The ball ended up in the left corner of the net, to bring the Bulldogs within one goal with just over six minutes to play.

After the goal, a minor skirmish broke out when McClain went to retrieve the ball. Several Churchill players tackled McClain in an effort to grab the ball and take it to midfield for a quick restart. But McClain and the rest of the Blazers' D stood strong for the remainder of the game, giving Blair a well-deserved 2-1 victory over one of the best high school soccer teams in the area.

As the Blazers came funneled off the field to the sounds of an adoring crowd, players couldn't help but express their joy in winning such an intense, important game. "That's the biggest win for Blair soccer in the past four years," said Zipin, a four-year varsity starter.

Although the Blazers were happy to put such a win on their resume- to go alongside a currently undefeated record- coach Baez was quick to dismiss calls for the Blazers to be ranked in local and national papers. "We're just taking little steps to get to where we want to be," said Baez. "No matter what, we're still just the Blazers."

The boys' varsity soccer team will play its next home game on Thursday, September 28 at 7 p.m. against the Blake Bengals.