The varsity girls's soccer team (11-1) ended their season with a triumphant 7-0 victory over the Blake Bengals. The constant rain throughout the game made ball-handling a trickier task. But the weather couldn't dampen the spirits of the players, who huddled together under a bright blue tarp, eager to send their seniors off with love and enthusiasm. 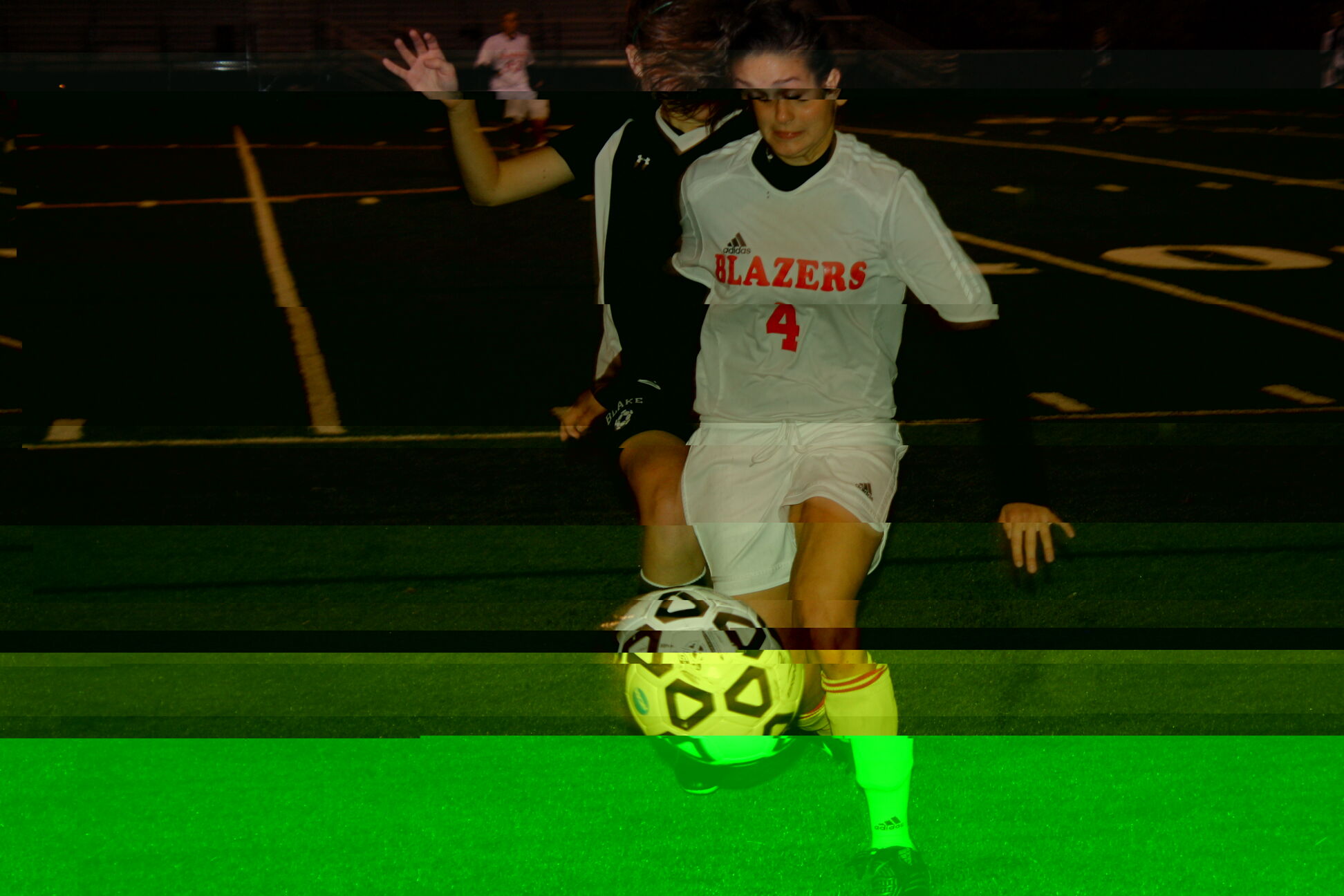 Photo: Senior Elana Gold runs to save the ball before it goes out of bounds.

Photo: Senior Elana Gold runs to save the ball before it goes out of bounds.

Blake turned up the pressure in the last moments of the game, but Blair's ironclad defense and smart goalkeeping easily handled their weak shots on goal and inferior passing movements. At that point in the game, the Blazers had already secured such an enormous lead that the best Blake could hope for was a meaningless consolation goal.

Blair easily dominated the Bengals, even from the first few minutes of play. Blazers had already taken three shots on target within the first ten minutes, while Blake seemed unable to maintain possession for any length of time. There were a number of corner kicks for Blair over the course of the game, and an incredible number of close shots on goal. In the first half, sophomore Jamie Kator shot the ball inches over the crossbar and saw her attempt ricochet off the field goal under-bar. Blair scored from another corner kick, but the goal was disallowed because of a foul on the goalie. Junior Saleiha Mayer-Marks's next corner kick was deflected into the goal after bouncing off the goalie's arm. 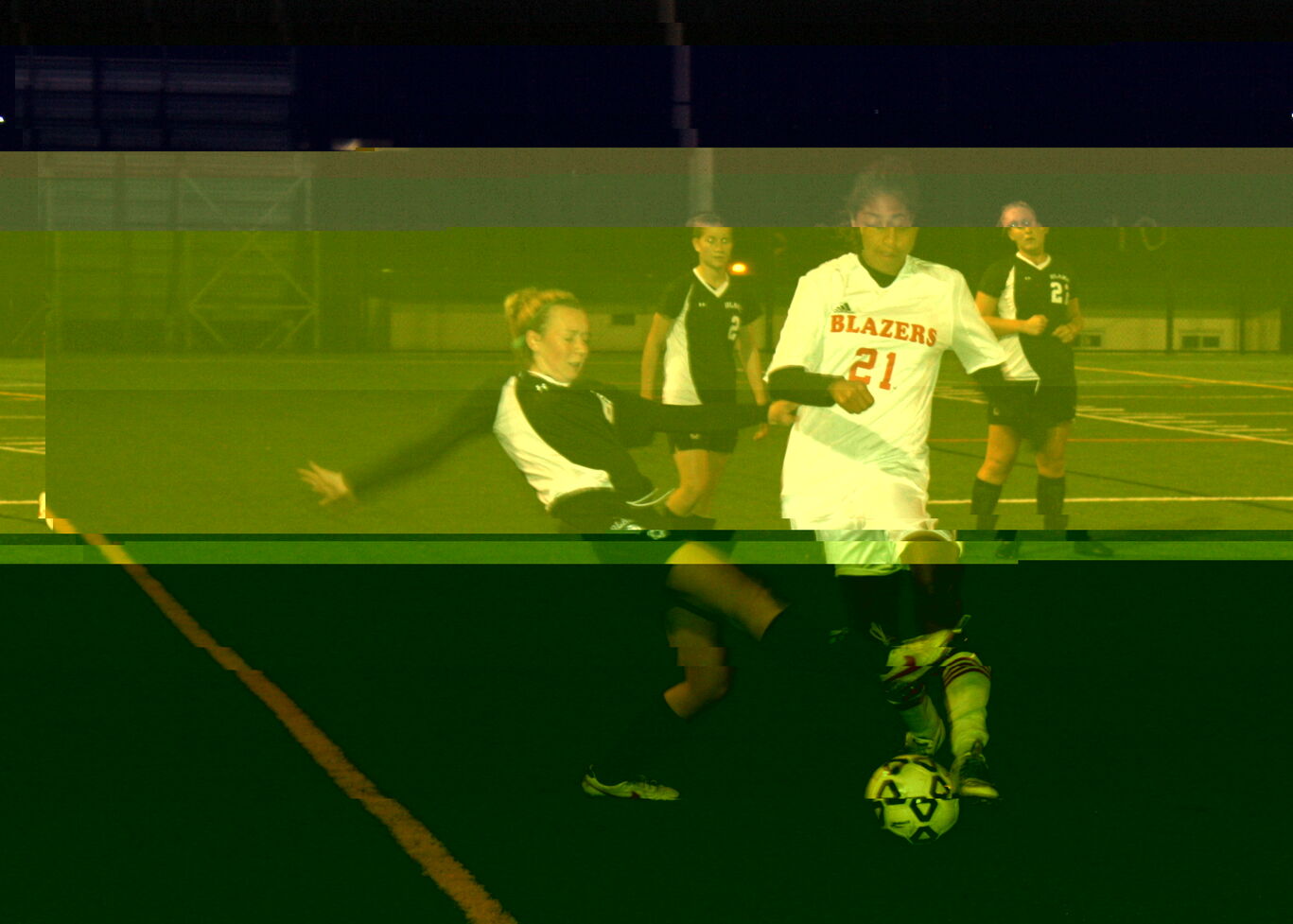 Blair's offense maintained strong pressure throughout the game, and kept Blake camped in Blair's half of the field. Skillful passing and accurate shooting, coupled with Blake's defensive errors, kept the Bengal goalkeeper very busy. Her misjudgments and errors led to many of Blair's goals. Junior Sarah McMillian's goal demonstrated the goalie's inferior playing, as the shot slipped right between her legs and into the net with only nine minutes remaining in the game.

Midway through the first half, junior Sophia Read scored the first goal of the game by returning a goal kick straight past the goalie. She completed her hat trick at the start of the second half, scoring two more goals within two minutes of each other. The Blake goalkeeper came out to block her, but slipped on the wet turf which allowed Read to zip past for an easy goal. Skillful offensive passes, blatant Bengal goalie errors and Read's own assertive offensive moves enabled her third goal to sail smoothly into the net. 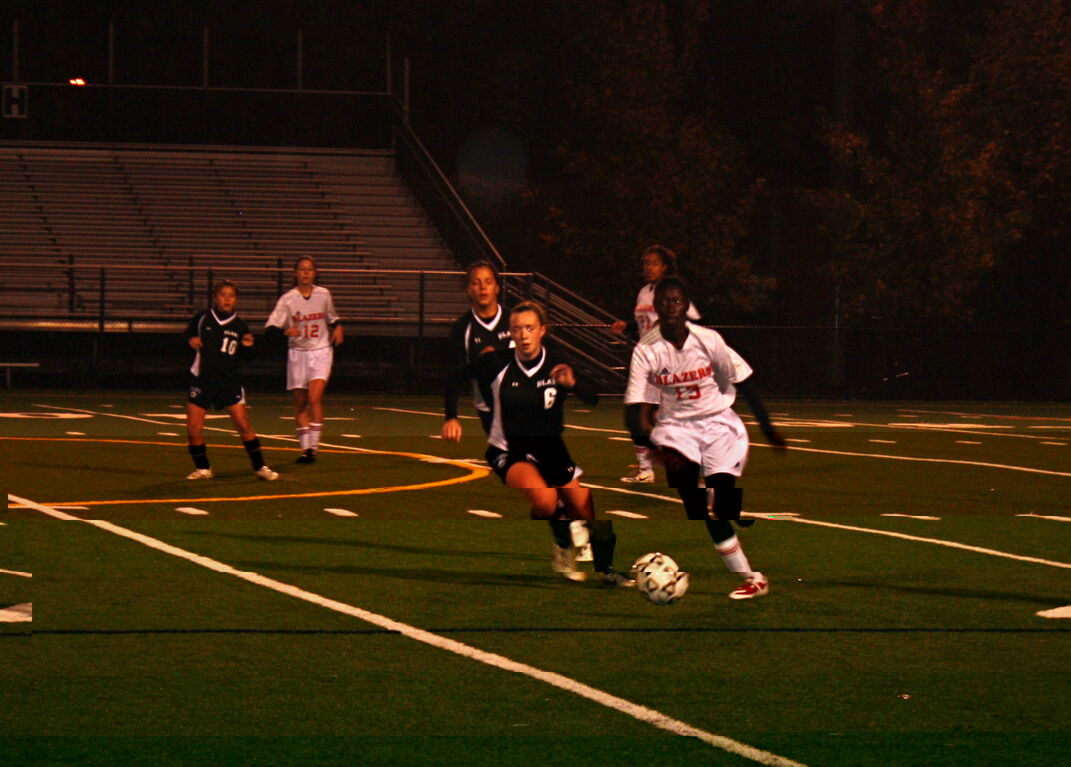 Photo: Senior Imani Pierre races to get to the ball first.

Photo: Senior Imani Pierre races to get to the ball first.

The constant rain affected the players's performance, but not enough to do any serious damage to the Blair girls. Senior co-captain Darcy Pelz-Butler noted that the ball seemed to move more unpredictably. "The ball skips a lot and bumps off in weird ways," she said. But the conditions had an equal effect on the Blake team. Head coach Robert Gibb also said that playing in the rain was good practice for playoff games that might occur in poor weather conditions.

Despite their equal disadvantage due to the weather, the Bengals seemed to suffer more throughout the game. They often relented to Blair's midfield pressure, and quickly gave up possession. Blake never really got out of first gear and seemed more like a minor obstacle for Blazers to tear through than an actual opponent to face.

Gibb said that this win was not crucial for anything other than pride, since playoff pairings have already been established. Regardless, Blair's senior night was clearly important to the team. The spirit and camaraderie was clear from the players's high energy before the game and at halftime, when they lovingly giggled at the recap of each senior's athletic and academic accomplishments. Gibb said he intentionally began the game with seniors as the starting lineup and ended the game with them on the sidelines. That way, he said, the opponent could finish by "watching the future of Blair soccer."

The girls's soccer team plays their first playoff game at home on Monday, Nov. 2. Time and opponent are TBD.