Four Blair students and Spanish teacher Dora Gonzalez traveled to El Salvador, Honduras and Guatemala from May 25 to May 31. The all expenses-paid trip, sponsored by TACA Airlines, is part of a program developed last year called "TACA te lleva a tus raíces" that is meant to reward high-achieving students of Hispanic descent in the United States. The Blair group was joined by a Spanish teacher and three students from Richard Montgomery High School.

Joseph Bellino, Blair's head of the ESOL Department, heard about the trip earlier this year and urged several Blair students to participate in the program because he felt it would be a great opportunity for the students to learn about Central American culture. With Gonzalez, they chose juniors Lucia Sirota, Amanda Liebrecht, Donovan Sanchez and sophomore Ruben Muñoz.

The group of nine departed from Dulles Airport and flew to San Salvador, El Salvador on May 25. TACA Airlines, which prepared the itinerary for the entire trip, also provided an escort for the duration of the trip who directed and served as a guide to the group in all their activities. The first on the itinerary was in San Salvador where the group met the Vice Minister of Exterior Affairs. 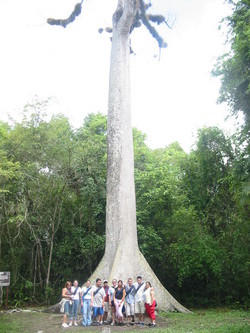 The next day, the group flew to and toured Guatemala City, Guatemala. They also visited Tikal National Park in Tikal, Guatemala and went on a tour of the Mayan ruins called "El Mundo Maya." The Mayan ruins serve as the oldest representation of Guatemala's culture. Both Sirota and Liebrecht agreed that exploring the Mayan ruins and its surroundings was their favorite part of the trip. "Seeing all the Mayan ruins was amazing [because of] all the stuff they did with such little technology," said Liebrecht. While in Guatemala, the group also visited a small mountain town called Chichicastenango, a highly populated indigenous village.

From Guatemala, the group drove to Copán, Honduras, where they stayed in a small town and visited the Copán ruins. Copán was the dominant Mayan city in the southern part of the Maya region and flourished during the seventh century. At the site there are remains of plazas and temples that are surrounded by the jungle.

Also while in Honduras, the group visited a town called San Pedro Sula. At the end of their trip, the group flew back to San Salvador and then back to the U.S.
Although the group stayed in mostly upper class hotels during the trip, they were also exposed to the poverty of the countries while they traveled by bus from place to place. This exposure was something that affected Sirota greatly. "[It's] a different take on life, seeing these countries plagued by poverty, but [at the same time] how their disposition was so pleasant and they were so willing to share," she said. "It made me feel like I was living in a small world. I came back happier."

During the trip, the students were able to not only learn about the culture of the countries they visited, but also about each other's culture; each student's family was from a different Spanish-speaking country. Most of the students who went did not know each other previously and through the trip were able to make new friends. "There was such a sense of camaraderie in the group. I became friends with a lot of people I normally wouldn't have been friends with," Liebrecht said.

For Gonzalez, this trip was an amazing experience that she hopes to repeat for her students in future years. She had never traveled to Central America before and found that the trip was a way for her to connect to the lives of her students and her students' parents. It was also a positive experience observing the teens react to seeing both the beauty of the country and the poverty of the people. "[It was rewarding] to see how our students got involved in the culture — sometimes how touched they were by what they saw and heard," said Gonzalez. "It was just so enlightening for me. We had a great time."

To find out more about TACA Airlines, visit their website.