"That's for you Sam! You're on fire!” yelled Blair fans as senior captain Samantha Schweickhardt led the softball team to victory over Clarksburg in the season opener on Wednesday night. The Blazers scored twice in the first inning and maintained their lead for a decisive 5-2 victory thanks in large part to the home team's tight defense.

The Blazers came out aggressive as Clarksburg began its night-long struggle to penetrate Blair's defense. With a strikeout by Schweickhardt, and two pop flies to centerfield caught by senior Becca Arbacher, the Blazers started strong in the field. They followed it up offensively with a base hit by Arbacher who was eventually brought home by sophomore Annie Pietanza. Junior Sabine Lipten closed the inning with a second run to extend the lead.

Blair held on to its lead while Clarksburg remained scoreless throughout the next three innings. Schweickhardt dominated from the mound, striking out six players and pleasing the small crowd of fans in the audience that donned custom made T-shirts with Schweickhardt's name and picture. In the fifth inning with runners on first and second, a missed pop fly to left field allowed Clarksburg to score its first run. But Blair held them to one run for the rest of the fifth thanks to a catch by freshman Camilla Arias and two more strikeouts by Schweickhardt.

Loaded with eight new players, including five freshmen, the varsity team was nervous to play together for the first time this season. Those worries, however, disappeared when the new players stepped up defensively, with freshman Andrea Brown making a stunning catch against the fence for the first out of the 4th inning. "We've been working really hard and we have a really new team this year, including two freshmen that went in and started and they all did exceptionally well,” senior captain Molly Nicholson said. 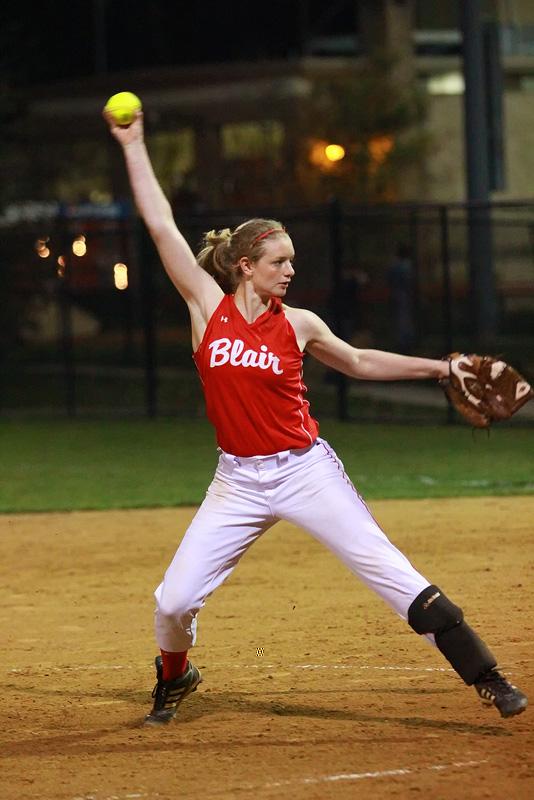 In the bottom of the fifth, Blair's offense rallied as Lipten slid into second for a steal after a basehit to first. A triple to deep left from Schweickhardt brought Lipten home. "I got into that last swing, took a deep breath and it felt good,” said Schweickhardt. Lipten agreed that the triple was the team's best moment. "We were all confident we were going to win by that point, but we were so tense because it was our first game. So when Sam made that hit it was a weight off my shoulders. Until then, Clarksburg thought they could win, but at that point I think they collapsed,” said Lipten. Nicholson followed her teammate's hit with a double, and a fumble by the Clarksburg catcher allowed Schweickhardt to score Blair's fifth run.

Pietanza owned the sixth inning. Arias fielded the first hit at second and flipped the ball to Pietanza at first for the first out. She tagged the second runner at first, then caught a line drive for the final out. Clarksburg scored its second run of the night in the top of the seventh, but it was too little, too late.

Blair head coach Louis Hoelman is proud of the team's opening, but already seems room for improvement. "There were a lot of first game jitters, and we played kind of tight. It was nice that we played through and came out with a win, but next time we need to relax for the whole thing,” Hoelman said.

The varsity softball team will play its next home game on Monday, Mar. 26 at 7:00 p.m. against Einstein.