Blazers turn their backs on Bush

On Thursday, Jan. 20, sophomore Nic Lukehart will dress up as conservative as possible for the 2004 Inauguration of President Bush. Lukehart, who fashions a slicked back Mohawk and punk apparel, would not normally sport conservative duds. "I want to get as close as possible," Lukehart explains. 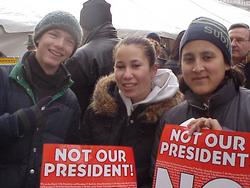 When Lukehart gets as close as possible to the artery of Bush's inaugural parade, where he says hundreds of conservative Bush supporters will cheer for the President-elect, he will pull of his nice, buttoned-up conservative shirt to display a large "W" in a circle, with a strike through it. "I really don't want to see this man in office," Lukehart rationalizes. "I'll do whatever it takes to send the message."

Like countless other protesters from all over the country, Lukehart will be at the Inauguration to protest the swearing-in of George Bush. Another Blazer who plans to attend the protest decides to protest differently. "I'm going to wear an Eric Shansby t-shirt," sophomore Justin Vlasits comments, referring to the Students for Global Responsibility's "ignorance is a weapon of mass destruction" t-shirt. "And I will be found screaming and carrying signs."

Different ways to speak out

But not all protesters are radical and extreme. Senior Hannah Schneider wants to go downtown for a little while and check out what's going on. She might want to participate in the Turn Your Back on Bush demonstration, where protesters will silently, stoically turn away from Bush when his limousine drives down the road.

Whatever Schneider ends up doing, she knows that she will be actually protesting. "I see protesting on TV all the time; this time I want to go down and do something." Schneider also wants to protest in smaller ways. "I'm probably not going to yell or scream, but I'm not going to buy anything on the Inauguration."

Other protesting options besides the popular Turn Your Back on Bush include demonstrations and marches. At the particular march Vlasits plans to attend, hundreds of protesters will participate in a die-in, in which protester will lie down in the street. The result is to block up traffic, says Vlasits. "It's supposed to signify all the dead Americans and Iraqis," said Vlasits.

Lukehart also considered some other possibilities before deciding on his unique protest. "I've been looking at protest groups, and the whole anarchist group sounded like fun," he says. "But I'm going to go with friends."

Speaking out is more risky than you think

While there are many exciting protesting options for Blazers, many are dangerous. Lukehart acknowledges the possibility for arrest. "The thought has crossed my mind, but I'm not afraid to be arrested." 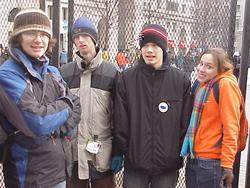 Vlasits understands that incarceration is not always up to the individual. "I'm sure some people will take it too far and get arrested," he says. Vlasits and his group, the Students for Global Responsibility, who are meeting at 10 a.m. in Malcom X Park (16 Street and Euclid Ave.), know how to be safe at the protest. "Keep away from people who look like they'll get violent," Vlasits explains. "We will remain peaceful ourselves and know that we're doing the right thing and hope the police will understand."

A more realistic danger for Blazers, though, is ditching seventh and eighth period exams, which coincide with the inaugural parade. One sophomore, who wishes to remain unidentified, says that protesting is much more important than exams. "I could just as easily make the exam the next day," the source said.

A major issue with Schneider is the inability for students to speak out against issues they feel connected too. "A lot of high school students can't vote, and therefore don't have a lot of say on what's going on," she says. Protesting is a way that students can have a voice, Schneider says.

Schneider herself has many reasons she's going to protest. One, for example, concerns the claim that Bush is too motivated by companies and politics. He is not connected with what's going on inside the U.S., she protests. And like thousands of other protesters, Scheider has the Iraqi war on her mind. "I have huge issues with the war."

So it makes Schneider upset with students who attend protests for popularity. "It's a normal thing to do," she says. "It's like, 'Hey I'm gonna go protest,'" Schneider says mockingly. She wants people to go to be educated, not simply go because of friends. "It's a personal choice."

On Thursday, Schneider and many other Blazers will march on down to D.C. and protest. These students say they are not going for glory or a shot on TV, they want to go to reach out and speak their mind. "The Inaugural protest is to show that even though 51% voted Bush in office," says Schneider, "there are a lot of young people who really care about it and have something to say."