Blazers unable to cage the Bulldogs

After 60 minutes of close calls, near misses and sharp hits, the varsity field hockey team (4-5-0) suffered a heartbreaking loss to the Churchill Bulldogs on Tuesday afternoon, 3-2. The Blazers played with great force and skill, even building a slight lead in protecting their home turf, but were not able to hold out against the experienced Bulldogs. 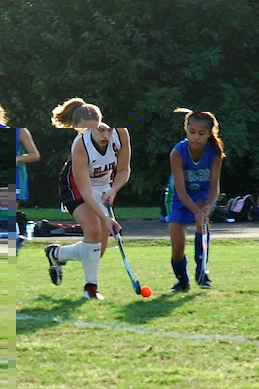 Photo: Senior Rachel Passman navigates the ball skillfully through a field of Churchill opponents. The Blazers fell 3-2 to the Bulldogs.

Photo: Senior Rachel Passman navigates the ball skillfully through a field of Churchill opponents. The Blazers fell 3-2 to the Bulldogs. Photo courtesy of Alex Joseph.

Blair led most of the game, sporting a 1-0 lead at halftime, then a 2-1 lead for some of the second half. Unfortunately, the Bulldogs were able to compose themselves and score with 11 minutes left in the game to tie the score. The Blazers fought and rallied for another goal but were unable to recover fast enough to prevent Churchill from scoring one last goal before the end of the game.

The game highlighted the great progress the fairly new team has made since the beginning of the season, as the Blazers held their own against the high-ranking Churchill team. "Churchill has only lost one game and I'm really impressed with how our girls played with so much heart," head coach Brooke Franceschini said. "They never let up."

The Blazers started off the game strong, passing accurately and quickly as they pushed the ball down toward the Bulldogs' cage. With the help of junior left forward Nellie Garlow and senior co captain Julia Stratton, the Blazers held control over the ball as they attempted over and over to score a goal on the Churchill team.

As the Blazers came out of their time out huddle during the first half, they chanted, "intensity;" a promise they would later follow through. A pass from sophomore right forward Miranda Bernard carried the ball toward the Bulldogs' cage and delivered the first goal of the game. "We played well as a team," Bernard said.

Senior co captain and goalie, Katelyn Luker dominated the game defensively, rejecting any goal attempts by the Churchill team. Throughout the first half, the Blazers hung onto their intensity, as well as the lead. "We played really well and we really connected," Garlow said. 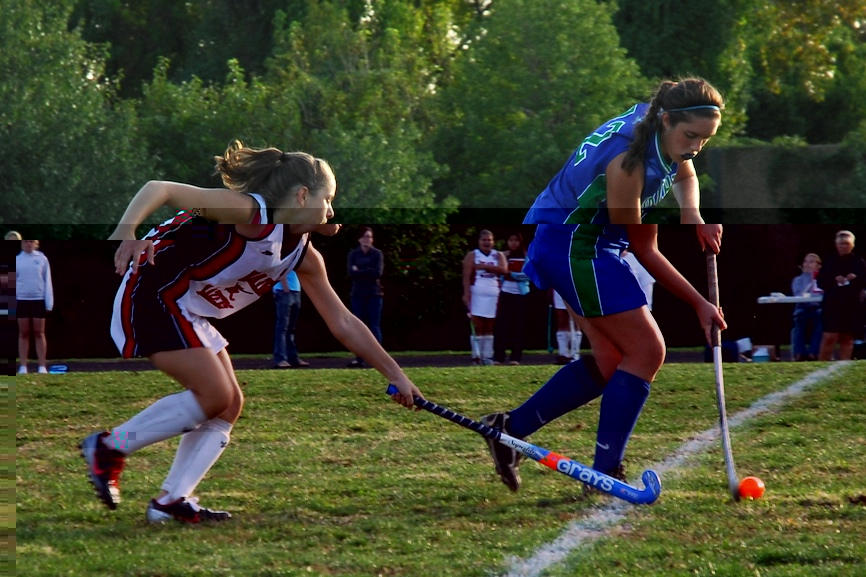 Photo: Junior Nellie Garlow reaches for the ball in order to get it away from a Churchill player.

Photo: Junior Nellie Garlow reaches for the ball in order to get it away from a Churchill player. Photo courtesy of Alex Joseph.

The Blazers started off the second half as they had started off the first, charging down the field while taking every available chance to drive the ball toward the cage. Slow transitions from offense to defense, however, allowed Churchill to score their first goal of the game, tying the score 1-1.
Head coach Brook Franceschini rallied her team, crying out from the sidelines, "who wants it more?" The Blazers answered by hammering in another goal in the Bulldogs' cage, bringing the score to 2-1. Garlow, Bernard and senior Rachel Passman worked together, weaving the ball between defending Churchill players. "We played with a lot of intensity and we're really proud of ourselves," Passman said.

Stepping up to the strong Bulldog offense, junior defender Laura Li and sophomore defender Blake Morgan-Gamber created a strong front, blocking many attempts to score on the Blazer cage. "Normally when someone scores, we just shut down," Luker said. "This time we kept fighting."

The Bulldogs scored the equalizer with just over ten minutes left, and then added the winning goal in the waning moments of the game. Blair never gave up, continuing to pressure Churchill and try to force mistakes. With seconds left in the game, confusion with a referee call caused the clock to run out for the Blazers, leaving the final score at 3-2.