Blair is a diverse place with people from all over the world, which means many travel home during spring or winter break to see family in exotic countries. Others simply travel over the course of the year to visit new areas - some as far away as Hawaii, Bermuda and Europe.

Senior Lillian Rosen and her family traveled to Bermuda for four days this past spring break. Usually, the family travels to places like Florida, but this year, the four went to Bermuda in honor of Rosen's graduation. 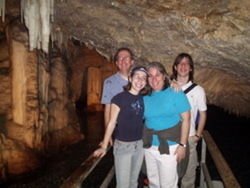 Click here for a gallery of pictures from Blazers' spring break vacations.

Click here for a gallery of pictures from Blazers' spring break vacations.


According to Rosen, who has been to numerous states on the east and west coasts, to Europe, to Jordan, to Syria and to Israel, Bermuda was especially beautiful, even though it rained for two days. "Bermuda is a gorgeous place even when it's gray and rainy outside," says Rosen. While there, Rosen and her family were able to see the entire island. "Bermuda is 25 miles long, so I went to all of it, South side, North side, Hamilton, St. George and all the places in between," says Rosen. The family went on nature hikes, visited many caves, relaxed on the beach, toured a museum of shipwrecks and pirates and ate "a lot of good food."

Seniors Clarence Turner and David Sileshi spent a week in Hawaii with Turner's family. While in Waikiki, Turner and Sileshi were able to go paddle boating, swim, see native dancers perform and appreciate the many beautiful mountains. For Sileshi, this was an extremely memorable experience. "[This was] the first time I crossed the ocean," he says.

Junior Lynda Seumo went to Kiev, Ukraine, for 12 days to visit her best friend, whose family recently moved to Ukraine, and saw many Greek Orthodox churches, attended three shows at the National Opera House, danced at many nightclubs and shopped. "Kiev has these little outdoor stand on Sundays where vendor sell really nice handmade tablecloths, handmade jewelry and beautiful oil paintings," says Seumo, reminiscing. She was also able to go a unique mall called Metrograd. "That was really cool because the mall was underground, and it was connected by a series of tunnels that led to different exits," says Seumo.

Although she does not speak Russian or Ukranian, Seumo says that once people picked up that she was American, she was able to communicate with them. "I was actually surprised at how many people spoke English," she says.

While Seumo was in Ukraine, senior German Osorio was close by with his girlfriend and a group of students from different states. They saw six parts of Italy and spent time at a mountain resort in the Swiss Alps. In a matter of ten days, Osorio was able to see Venice, Tuscany, Florence, Assisi, Rome and the Italian Lakes. His excursions included crossing the Italian Alps, seeing St. Mark's Cathedral, going to the Vatican to visit St. Peter's Basilica and the Sistine Chapel and seeing Michelangelo's famous David. "One of the most interesting things that happened was observing face to face my dear friend David," says Osorio, who's middle name is also David.

Osorio found that his ability to speak fluent Spanish gave him an "advantage" in communicating with the people. He found Italians to be very friendly and also especialy enjoyed eating Italian food. "We ate lots of Pizza and Lasagna, the best I ever tasted," says Osorio.

While in Italy, Osorio says his biggest disappointment was going to a nightclub for the last event of the trip and not being able to spend time with Italian locals besides tour guides. "I was very excited because it was going to be the first time I was going to meet Italian people throughout the whole trip," laments Osorio, "[but] the club was packed with North Americans."