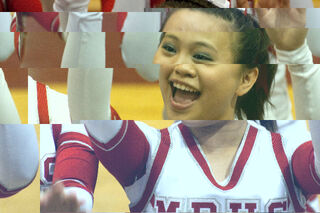 Photo: Sophomore Victoria Luc pumps up the crowd from the sidelines.

Photo: Sophomore Victoria Luc pumps up the crowd from the sidelines.

Blair's winning routine began with a cheer that got fans on their feet, spelling out "Blazers" and yelling, "C'mon Blazers, we're the best!" The routine transitioned into a sequence of synchronized dance moves at the end of which Blair's male cheerleaders performed gymnastics. Some of the team then joined the boys in tumbling, while others moved into position for stunts. The Blazers ended their routine with a crowd-pleasing pyramid.

Judges evaluated the competing cheerleading squads on fundamental skills, group techniques, gymnastics and the overall effect of their routine. All routines were held to a strict time limit of three minutes.

Though Blair did well in all four areas, coach Sarah Fillman thought that the girls' attitudes primarily helped them place. "They had fun… last year we focused too much on execution and eventually their nerves got the best of them, but this year we made it all about fun and exhibition. Our goal was to place, and I think attitude is part of why we did," she said. 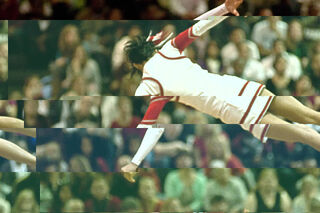 This positive mindset, coupled with enthusiastic spirit, also helped the Blazers win the spirit award. For this award, schools are judged on enthusiasm, sportsmanship, organization, interaction and the banner, which hangs above the spectator section of the gym. In between each school's performance, Blair cheerleaders led their fans in a series of lively cheers. Before each of Blair's competitors took the floor, Blazers cheered, "Good luck to you!" Both these cheers and positive sportsmanship helped Blair win the award.

Senior captain Lauren Gilkey said that taking home the spirit award was the highlight of the day. "We're so glad to win our second spirit award. The crowd was amazing," she said. Throngs of Blair students, parents and alumni filled two sections of the gym and cheered loudly, often drowning out the other schools. 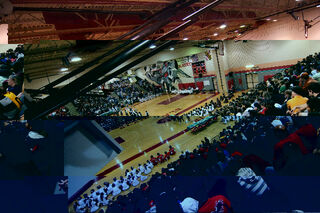 Blazers may have out-yelled the other spectators, but Gilkey was surprised that her team placed as highly as they did. "I am completely shocked. We worked really hard, but there were a lot of great teams out there today," she said. Fillman said that in order to win first place next year, the team will have to be more precise in their movements and improve their transitions. "We have to work on overall cleanliness, and continue working on transitions," she said.

Though she acknowledges that her team must improve, Fillman was delighted the team did so well. "I couldn't be more proud," she said. Coach Roxanne Fus was also pleased with the performance, and appreciated the avid fan support. "We did great, and the crowd was great! I mean, what a great school," she said.