On Wednesday, representatives from the competition presented awards to 31 Blazers in the auditorium. The students' prizes represented one-tenth of the nationwide winnings of the competition. 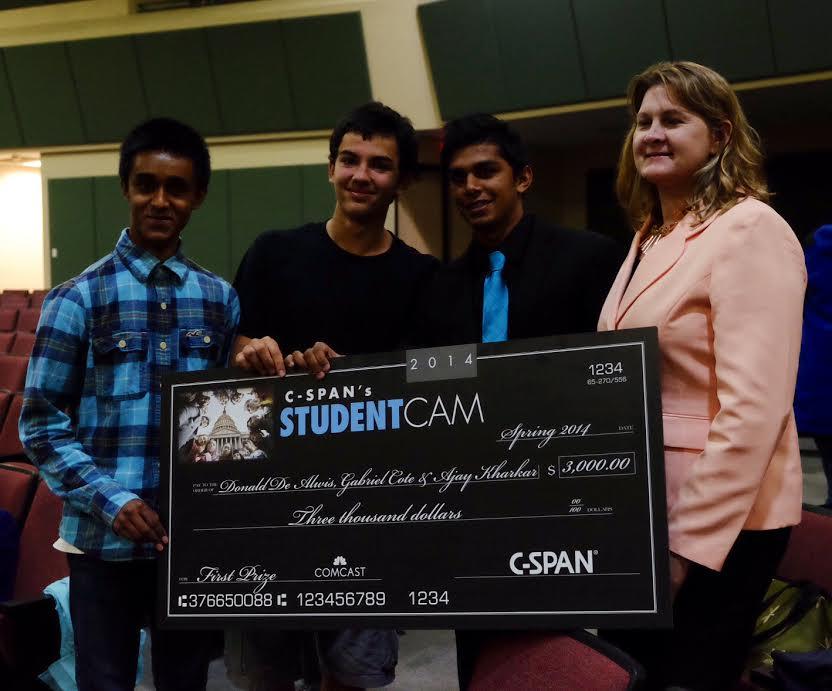 Sophomores Donald De Alwis, Gabriel Cote and Ajay Kharkar won first prize in the East region for their documentary "A Murky Future," regarding water pollution in U.S. waterways. The video aired on C-SPAN throughout the day on April 24, and the students received $3,000 in award money. Additionally, De Alwis met with House Minority Leader Nancy Pelosi to discuss his group's issue and represented his group at a roundtable interview that will be broadcasted on C-SPAN on May 3.

C-SPAN representative Josh Koning presented the students with their awards and noted that the competition gives youth a chance to express their opinions. "It gives the students an opportunity to have their voices heard. They pick an idea that's important to them, and they've had a great response from people in Congress," he said. De Alwis also stated that it provides an incentive for students to get involved in political issues. "It helps students get engaged in their communities and really analyze the topics they wouldn't otherwise notice," he stated.

Blair students represented some of the top videos out of a total of 2,355 entries from students from 46 states plus Washington D.C., Taiwan and the United Arab Emirates. In addressing the students, C-SPAN representative Craig McAndrew stated this was partially due to the hard work evident in their videos. "It's so refreshing and inspiring to see you guys putting in the effort and learning. It is no small feat that these are some of the best we've seen," McAndrew said.

In addition to the first prize winners, sophomores Max Foley-Keene, Anna O'Driscoll and Paul Bass and freshmen Anna Barth and Juliana Lu-Yang won second prize in the East Region for their documentaries "Filibuster Reform 2014" and "Chasing the American Dream," respectively. Both documentaries will be broadcasted on C-SPAN, and each group won $1,500. Juniors Jasper Saah and Jacob Popper and sophomores Amalia Chiapperino, Madeleine Evangelista and Joseph Estrin won third prize in the East Region, winning $750 for each group, and six more groups of sophomores received Honorable Mentions.

During the awards ceremony, media teacher Paris Bustillos, who helped the students work on their videos, noted that the prizes were real testaments to the students' intellectual curiosity. "They didn't enter for the money or the prestige. They entered because it gives them the chance to compete at an intellectual level you might not be able to get at a high school level," he said. The students' commitment was especially evident to the C-SPAN judges. "There's a clear difference when a student takes the project seriously, and that was clear for all the videos from Blair," McAndrew stated.

The students' dedication was immense. De Alwis estimated that his group had spent more than 150 hours on the project, shooting footage, creating a script, conducting interviews and—most of all—editing. Of all that he had learned from the project, he said, that was the most important: "Editing takes a lot more time than we originally planned," he noted.