The 25 MCPS seniors were each awarded a $100 cash prize, while the juniors received certificates of merit. The Montgomery College students each received a $500 scholarship to pursue further education. 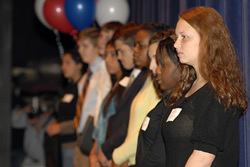 Photo: Senior Charlotte Aldebron won $100 from the Arts and Humanities Council for her achievement in the humanities. Photo courtesy of Daniel Peck and the AHCMC web site.

Photo: Senior Charlotte Aldebron won $100 from the Arts and Humanities Council for her achievement in the humanities. Photo courtesy of Daniel Peck and the AHCMC web site.

The award, according to an AHCMC press release, distinguishes students who show exemplary achievement in areas of analysis, communication and critical thinking, including language, history, debate, fine arts, philosophy and journalism. Curtis was a respected author, historian and educator based in Montgomery County, AHCMC President Ron Wolfsheimer said.

Snail, whose passions include photography and languages, enjoyed the reception and was delighted to accept the award. "I saw how the humanities open doors," she said. "It proves to me that this is what my future holds."

Wolfsheimer opened the awards ceremony, comparing Edwin Starr's "War" to J.K. Rowling's Harry Potter books to encourage students to "think past the obvious and explore what could be."

Citing conflicts and disruption in Iraq, Pakistan and closer to home in Georgia and Louisiana, Krebs contended that "we need more people to study the humanities, to work out our differences" through effective communication and exchange.

Guest speaker and county councilman Marc Elrich agreed. "We as a society can't get to the point where we think we can solve everything with a computer," he said. "It really comes down to our understanding of each other."

Elrich then brought out Simon and Hax, the latter known for revolutionizing the advice column with her point-blank analysis of the real issues, frequently with "coffee-up-your-nose-funny advice," as Simon described.

Hax offered the audience her best counsels for surviving high school. "Do your homework, go to bed early, don't drive too fast and try to keep your stupid experimentation to yourself as much as possible," she said. After disclosing stories of her path from a small town in Connecticut to the Ivy League to a full-fledged career at the Washington Post, Hax fielded questions from the audience.

Krebs concluded the program by reading the names of all 101 recipients, who he said belonged to "the future of American culture."