The Moody's Foundation awarded $20,000 in scholarship money to seniors Jacob Hurwitz, David Tolnay, Scott Yu and junior Andrew Das Sarma on April 28 at the final competition in the Moody Math Challenge in New York City. The Blazers worked as a team to solve a problem dealing with the 2010 U.S. Census. The Moody's Foundation supports and funds research and analysis of quantitative credit risk, according to their website. 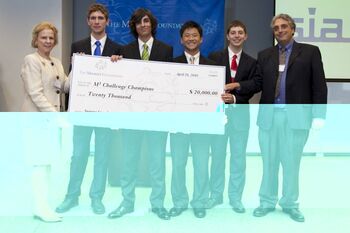 The first round of the competition took place in early March and the Blazers found out they were finalists in mid April. The boys received an all-expense-paid trip to New York City to compete.

In the first round of competition, the teams were allotted 14 hours to create a solution and presentation to the given problem. "We receive the problem at seven in the morning and turn in our work at 9 p.m.," Yu said. Teams were allowed to be as creative as possible and include supplements such as computer models. In the finals, the team presented the project to a panel of Ph.D. level mathematicians, according to Tolnay.

Two teams from Blair, coached by Stein and Magnet teacher Eric Walstein, entered the competition separately. Though Walstein's team did not advance this year, it received honorable mention in last year's challenge. Stein's team was informally chosen based on unique skills the members could bring to the project, according to Das Sarma. "Jacob and I were the hardcore mathematicians, Tolnay created computer models to impress the judges, and Scott is a good writer," he said. Tolnay felt that the strong balance of the team gave them an advantage against others. "We had diversity, because a lot of the teams were packed with mathematicians," he said.

The team put in their best work and commemorated their win, according to Das Sarma. "We walked around New York with a big fat check to celebrate," he said.