The varsity field hockey team took on the Springbrook Blue Devils for their last game of their season on Friday afternoon. The Blazers (5-7-0) had a tough time keeping their heads and hearts in the game and suffered a 2-1 loss to the Blue Devils.

One of the reasons for the loss may have been the many distractions and interruptions the Blazers faced on Friday, including a bizarre 10-minute break in the game due to a car fire in the Blazer parking lot. "I don't think they were that motivated today," head coach Brook Franceschini said of her team. "There were a lot of things that diverted their attention." 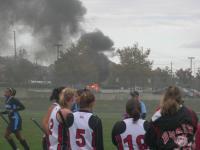 Photo: Members of the varsity team look on as smoke from a car fire engulfs the field.

Photo: Members of the varsity team look on as smoke from a car fire engulfs the field. Photo courtesy of Katie Sint.

Blair played strongly throughout the first half but as the smoke from the car cleared, so did their aggression in the game. The second half of the game was an uphill battle for Blair, as the Blazers struggled to keep up a strong defensive front against the Springbrook flyers.

Starting the game off impressively, the Blazers quickly earned a corner on the Blue Devils' goalie and continued to keep all the action on Springbrook's end of the field. "We played really well in the first half," senior co-captain Julia Stratton said. As Springbrook began to push back up the field toward the Blazer cage, the varsity team found a reliable "second goalie" in junior defensive player Laura Li, who swooped in and stealthily blocked repeated attempts on goal.

As the battle for control of the ball continued, smoke from the flaming car covered the field, prompting the referees to call a break in the game. When the Blazers stepped back onto the field, they appeared inspired to dominate the game. Hard drives by Stratton, senior Rachel Passman and junior Lily Alexander blew past the Blue Devil defense and earned two consecutive corners on the Springbrook goalie. Stratton capitalized on the corner and hammered in the first goal of the game. Springbrook quickly retaliated against the Blazers by shooting in a goal before the end of the half, tying the score at 1-1.

In the second half, the Blazers had to form a defensive front against the swift and agile Blue Devil offensive flyers. The Blue Devils quickly gained a corner on senior co-captain and goalie Katelyn Luker. Despite Luker's strong efforts, the Springbrook offense snuck what would be the decisive goal into the Blazer cage to break the tie.

The Blue Devils were relentless, quickly and constantly driving the ball back towards the Blazer cage. The Blazers had strengthened their defense as sophomore defensive player Blake Morgan-Gamber, Li and Luker stepped up their game, keeping the Blue Devils from capitalizing on any corners. Unfortunately for the Blazers, the varsity team could not come back offensively and lost to the Blue Devils, 2-1. "We are still improving. We know how to score and we know how to pass, we just have to put them together," Stratton said. "Our season's not over."

The team takes on the Springbrook Blue Devils again next week for the first round of playoffs and both Franceschini and the team intend on an upset. "We're going to watch game tapes and this game will motivate us to win. We know we can beat them," Morgan-Gamber said.

Franceschini noticed the eagerness the team has in wanting to make a comeback and improving in the playoffs next week. "We are going to react to what we need to improve," Franceschini summed up. "We're hungry for a win now."