In their fifth game of the season, boys' varsity soccer (2-3) lost to the Springbrook Blue Devils 2-0 after a tough second half. 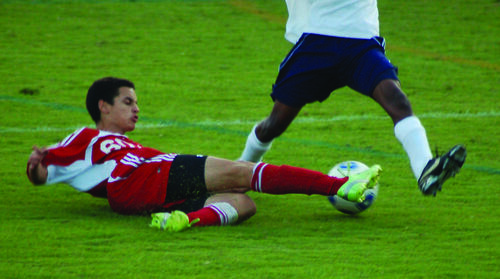 Blair underestimated its opponents by believing that it could blow past Springbrook after decisively defeating the Devils during preseason. The Blazers did not play to their potential in the first half, allowing Springbrook to maximize possession time. Although Blair played hard toward the end of the game with more frequent goal attempts, the Blazers were unable to make up the two goals. "They have to come to play," head coach John Haigh said about Blair. "Springbrook's effort level was very high."

The first goal was scored with about nine minutes left in the first half, when a Springbrook player booted the ball past junior goalkeeper Kit Durban.

With less than ten minutes left in the second half, Springbrook scored its second goal with what Haigh called a fluke goal. A Blue Devil sent the ball shooting in a high arc toward the goal, and it struck the top bar of the goal and ricocheted in.

In the second half, the Blazers realized that Springbrook was tougher competition than they had originally thought. "After the half they started playing a little harder," Haigh said. Blair became increasingly determined to tie up the game, taking several shots on goal. Unfortunately, it wasn't enough to close the gap. Haigh says Blair played well for the last 15 to 20 minutes of the game.

Durban consistently defended the goal with several skillful saves. After Durban deflected a Springbrook shot, an offensive player knocked the ball back into the goal. The ball deflected off the top of the goal and into Durban's outstretched hands as he secured an incredible save.

With their next game against Paint Branch, the Blazers are determined to improve their game. "We need to play safe in the back, and not let in easy goals," Aaron Baldwin said. As for working on the team's game-time mentality, Xander Baldwin said, "we need to come out harder." Haigh agreed that Blair must make a solid effort in its remaining 4A division games.