BNC expands to two periods for next school year

Blair Network Communications (BNC) will expand next year and separate into BNC and Infoflow, according to executive producers and juniors Luc Picone and Karuna Nandkumar. There were so many people who wanted to become a part of the school's recently bolstered production of the morning announcements that an application process was added. 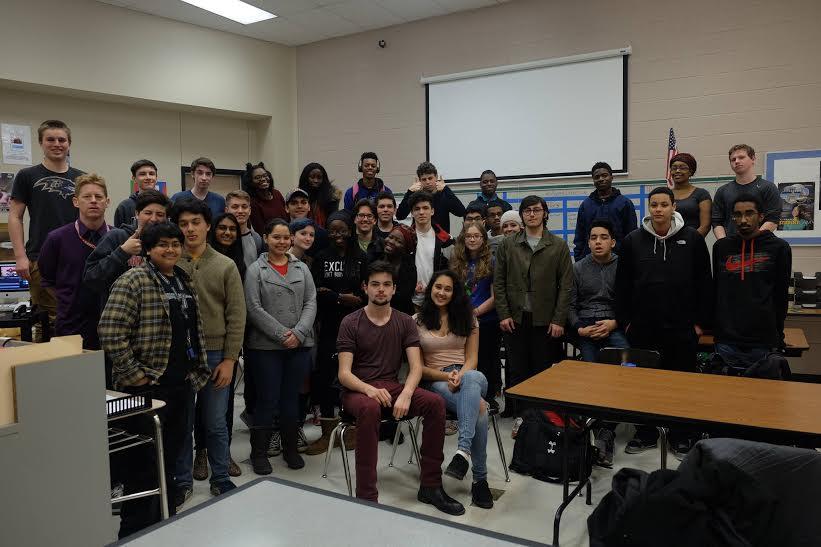 Photo: Joining the BNC crew required an application process for next school year.

Photo: Joining the BNC crew required an application process for next school year.

In the early 2000s, BNC had a morning announcement show, videos and radio shows, but enrollment decreased in recent years before advisor George Mayo took on its revival. Picone and Nandkumar stepped up to become executive producers and direct Infoflow, the daily news show. "The main focus behind our update this year is redesigning Infoflow and getting it back on its feet. Now that there's an established formula we want to start restoring the reputation that BNC used to have as a reputable journalistic outlet," Picone said.

The influx of students will allow for two classes during the lunch block. One class will produce Infoflow each day, while another slightly smaller class will make short documentaries and create TV segments for the website. Currently, most of the students work to produce Infoflow with a few working on other packages from sports teams or clubs. "We'd rather get better than keep expanding, but more students will make it easy to create better content, and grow the site so there is more variety," Mayo said.

BNC has been working with MCPS TV, and a partnered documentary about Islamophobia is already in the works to be aired. "Our main outlet is MCPS TV because they have contracted us to make media for TV, but we will also be sending our stuff out to competitions and get ourselves out there to prove that we do more than just make the morning's daily show," Picone said.

Picone and Nandkumar led BNC back to relevance and have made it into the source for video media. They've been attracting more people due to this year's success, and hope to build on it in the coming years. However, with an increase in people came an increase in responsibility for the executive producers who will have to relegate tasks down the chain of command. For next year, they are already taking steps toward that. "Karuna and I played a really big role in getting BNC together, so when we take this big leap, we need to start delegating our work for when we leave. Although I don't think we want to, we're going to have to back off on the micromanagement," Picone said.

The executive producers want to emphasize different mediums, including their website BNC Online and their social media presence. The executive producers were approached by three sophomores who wanted to improve BNC's webpage to include helpful resources for students such as an online course catalog, up-to-date sports reporting and interest videos about teachers or students. They will also try to fundraise for a larger budget to increase their resources. "We have to leave a structure in place that will be able to function without us, so even though we'll be in the studio for both lunches, we're used to putting in some extra time and are looking forward to it," Nandkumar said.